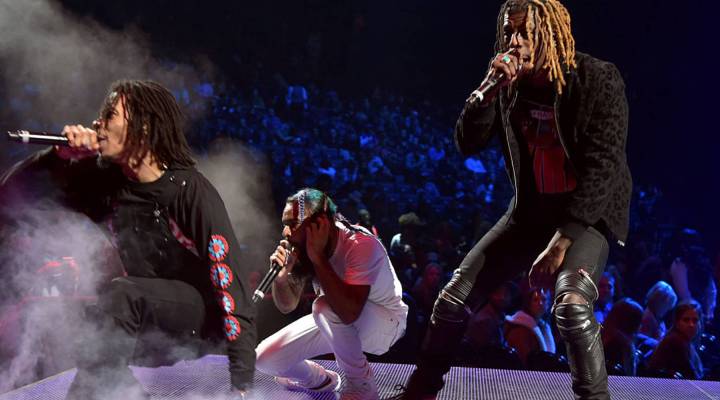 If you wanted to make it big in the music industry, the playbook used to go:

1. Get some buzz
2. Play some shows
3. Sign with a major record label.

But for the hip-hop group Flatbush Zombies, staying independent is a source of pride — with a little business acumen and creative control mixed in. Their debut album, 3001: A Laced Odyssey hit No. 2 on Billboard’s rap chart, and members Erick, Meech and Juice joined the show to discuss their experience in the industry and more.

On why they refuse to sign with a record label

Erick: A lot of people get signed to labels because, I wouldn’t say a favor, but sometimes people slip through the cracks just because of opportunity. It doesn’t mean you have a real chance of selling tickets or selling anything, it just means you’re part of a bigger system. And we talk about things that, I wouldn’t say they’re wrong, but people think they’re wrong because they make you question, or they make you inquisitive. Major labels are more scared of that, they want you to make music that’s palatable for everybody. I don’t think we would have done well, I don’t think even now we would do well under that structure.

Meech: I don’t think we blew up yet. I try not to think about it. You don’t get too wrapped up into all that. Just have fun, keep making music. I don’t want this to ever to become something that feels like a job for us. It’s a job, but it’s also…

Meech: There you go. It’s a job because we’re getting paid for it, but honestly I would be doing this with these guys even if we weren’t. I always tell people this. I’d be making music, [our] shirts, if we only sold those shirts only to our friends, I’d be still making them, if we only listened to our music and smoked our weed to our music, I would still do it. Regardless, because this is what I like to do.

On former police commissioner’s William Bratton statement: “The crazy world of the so-called rap artists who are basically thugs that basically celebrate the violence they live all their lives and unfortunately that violence often manifests itself during the performances.”

Meech: It’s very unfair. Not all of us preach violence, and just because you make songs about violence doesn’t mean you’re preaching it. Violence exists, so is a movie director like Michael Bay an evil man because people explode and die in his movies? I think it’s very unfair. You hear rock songs, “Let the bodies hit the floor,” and all this crazy stuff, they don’t get in trouble for any of that stuff at all. It’s funny that same night — it’s not funny, it’s actually sad — that same night we had a show maybe five blocks away, and there was mosh pits and all that stuff, but it was beautiful and it was fun. And no one got hurt. And it was a beautiful representation of our culture and our people, black people, white people, Spanish people, Asian people, everyone in the crowd, all religions, all colors and it didn’t matter. That commissioner was close-minded.