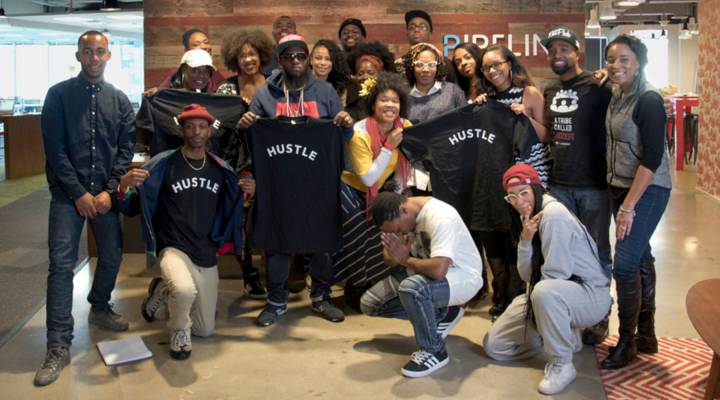 COPY
Students at the Institute of Hip Hop Entrepreneurship are learning how to start a business. Photo courtesy of the IHHE

Students at the Institute of Hip Hop Entrepreneurship are learning how to start a business. Photo courtesy of the IHHE
Listen Now

A group of students are sitting around a swanky office space in Manhattan working on an assignment to come with a marketing plan for a product. In this case, it’s a package of temporary metallic tattoos.

Ke Stevenson, one of the students, chimes in.

“I was thinking something like literally getting babies, like 1 year old, and thugging em’ out with temporary tattoos, kind of like this,” Stevenson said. On her phone, she pulls up the cover of “Tha Carter III,” an album by the rapper Lil Wayne. It’s a photo of him as a toddler wearing a blue pinstripe suit, but it’s superimposed with his current face tattoos.

It’s fitting, considering that this is the Institute of Hip Hop Entrepreneurship, a tuition-free program that uses lessons from the hip-hop industry to teach 18- to 32-year-olds how to start a business. The nine-month course, which is funded by the John S. and James L. Knight Foundation, started in November 2016. (Editor’s note: The Knight Foundation provides financial support to Marketplace’s parent company.)

Today’s lesson is guerrilla marketing — using creative ways to sell a product, usually in public places, often on a small budget. It can mean sticking up posters, handing out swag or drawing stencils on walls and sidewalks. These marketing tactics are now commonplace at companies like Nike, Toyota and Sony.

Students Kenny Earle and Rahman Wortman work together during a session of the Institute of Hip Hop Entrepreneurship.

Many of these practices were pioneered by hip-hop artists and labels, says Meegan Denenberg, a marketing executive who co-founded the Institute.

“The hip-hop industry ended up innovating so many different ways because they were never any rules attached to it to be able to get the word out,” Denenberg said.

Guest speakers at the Institute have included hip-hop artists, but also finance experts, lawyers, and small business owners. The students have learned practical skills, like how to build a team and do payroll.

The point of the program is not to mentor the next generation of emcees, said co-founder Tayyib Smith, a serial entrepreneur and former music executive. It’s to teach these 24 students, all people of color, many without college degrees, how to start a business.

“The business community in general is very exclusionary to people of color or people who might not come from a ZIP code that would allow them the right academic pedigree to get into an accelerator or have access to an incubator,” Smith said.

Kenny Earle, 27, is working on an app that’ll connect artists like photographers to people who want to hire them. On a crowded subway after the group’s marketing lesson, he said the program allows him to be himself.

“It ain’t no dress code or nothing like that,” Earle said. “We just get to freely be who we are and show that we have a lot of good ideas, you know? And I think that’s very empowering.” Earle said one of the biggest lessons he’s learned from hip-hop is grit. “In the field of hip-hop, you’ve got to really believe in what you doing,” he said. “You can’t let people intimidate you.”

He said it’s not unlike starting a business.