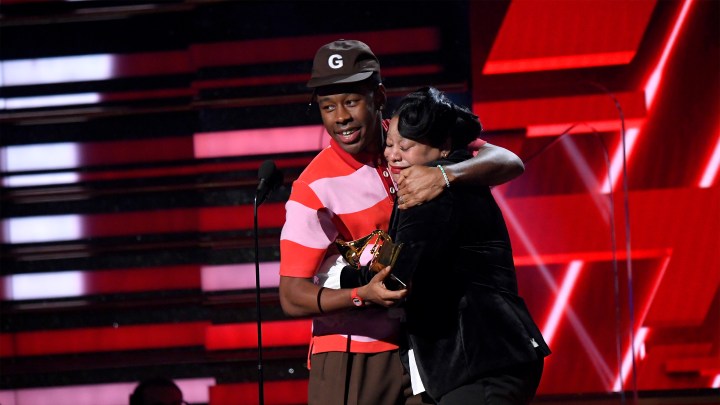 COPY
Tyler, the Creator accepts his Grammy for best rap album alongside his mother at the 62nd awards. The artist has denounced the word "urban" when used to describe music made by Black artists. Kevork Djansezian/Getty Images
Race and Economy

Tyler, the Creator accepts his Grammy for best rap album alongside his mother at the 62nd awards. The artist has denounced the word "urban" when used to describe music made by Black artists. Kevork Djansezian/Getty Images
Listen Now

The Recording Academy announced Wednesday that the Grammy Awards will drop the word “urban” from the names of several categories. Republic Records says it’s dropping the word, too, and other labels — and radio stations — are reportedly moving in the same direction.

After Tyler, the Creator won a Grammy in January, he had some thoughts about the way his music is categorized.

“I don’t like that ‘urban’ word, it’s just a politically correct way to say the N-word to me,” he said.

Music categories include urban contemporary, urban Latino, urban gospel and more. The word really means one thing, said A.D. Carson, a professor of hip-hop at the University of Virginia.

“The genre categories have attempted really to correspond to the bodies of the people who make the music more than describing what we might observe or hear to be unique characteristics of any of the music that’s being produced,” Carson said.

That’s because there’s a range of music being produced by Black artists. There’s Tyler, the Creator’s unique sound, pure pop music, hip-hop and even country.

This isn’t the first time the music business has changed the language it uses to refer to music by Black artists. In 1942, Billboard magazine unveiled a new chart called the “Harlem Hit Parade.” Then it became “race records.” Then “rhythm and blues,” then “soul.” The phrase “urban contemporary” took off in the 1970s.

“It shapes the way we think and understand how the music industry works,” she said. “It really hides all of these practices over the years.”

The Grammys are going to use the word “progressive” instead of “urban.” Carson said that, too, could be problematic.

“We just probably have to be careful that the changing of the words don’t end up just being another — like we end up with another euphemism that isn’t really that different,” Carson said.

Another euphemism that just ends up meaning music by Black artists.