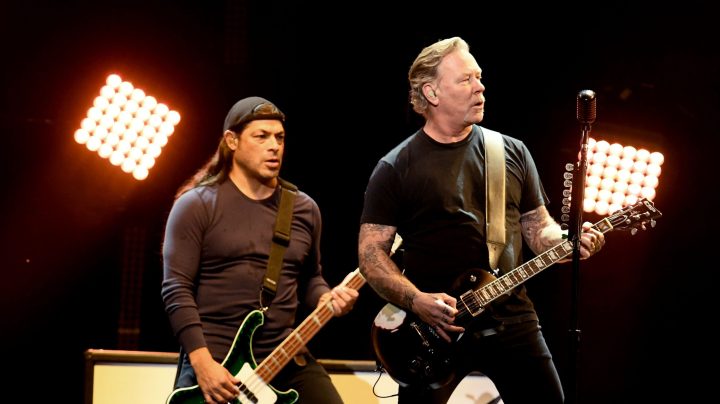 COPY
Metallica sued Napster over piracy concerns, during an era music analysts refer to as a dark moment for the record industry. Kevin Winter/Getty

Metallica sued Napster over piracy concerns, during an era music analysts refer to as a dark moment for the record industry. Kevin Winter/Getty
Listen Now

When Warner Music went private in 2011, the music industry had been in a downward spiral for years. CD sales were tanking. Piracy was rampant.

“It was an abject wasteland for the recorded music industry,” said George Howard, who teaches business at the Berklee College Of Music and used to work at Sony. “It was a really dark time. “

Piracy drove the band Metallica to sue Napster, a platform that let people share music without paying for it, in 2000. But the real change came from music streaming services in 2014 or so.

Streaming now accounts for about 75% of the industry’s revenue.

“One way to think about this is water,” said Carnegie Mellon professor Michael Smith. “We have water fountains everywhere. And yet people will cheerfully pay a couple bucks for a bottle of water because it’s convenient and I can carry it around. I think exactly the same thing happened with Spotify.”

And the money is starting to pour back in for record labels. Warner Music had revenue of $1.26 billion last quarter, its best in about 15 years.

But the question of whether music streaming is good for artists remains been contentious.

“Musicians still aren’t getting a fair shake,” musician and columnist Kabir Sehgal wrote in a 2018. “Here’s the math: Spotify pays about $0.006 to $0.0084 per stream to the holder of music rights. And the ‘holder’ can be split among the record label, producers, artists, and songwriters.”

“All these independent record labels who used to sell 10,000 [to] 20,000 copies of CDs per release,” he said. “That was a business model, and it was a nice piece of revenue. They’re all getting hurt.”

Not everyone agrees. Lesfetz, the music analyst, says the most successful artists are making more money now than they used to, adjusted for inflation. And they’re less reliant on labels to reach that level of success. The goal of most artist used to be getting signed by a label, which would pump money into marketing musicians in order to make them stars.

“Whereas today, they want you to prove success on your own,” Lesfetz said, “via SoundCloud, Spotify, YouTube.”