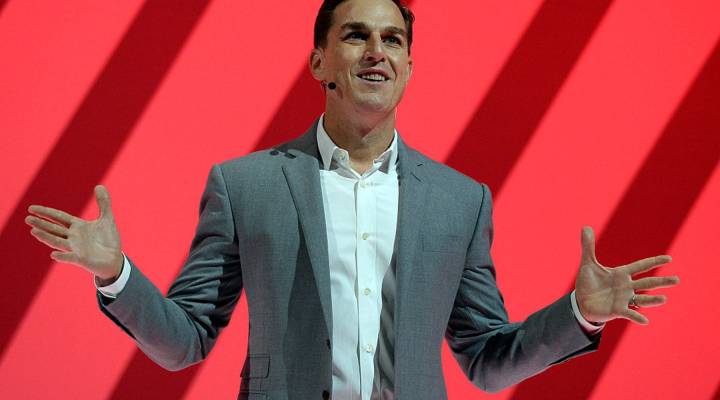 Earlier this month, video companies and gamers descended on Los Angeles for the annual Electronic Entertainment Expo or E3. That included Andrew Wilson, the CEO of EA — the company that makes FIFA, Madden, and Battlefield.

The company invited super fans to try out a handful of games not yet released to the general public. That included “Battlefield 1,” the company’s World War I game, set to be released in October.

Wilson on whether he thinks of EA as a social media company:

Well, there are a whole bunch of motivations as to why we play games — inspiration, escape, competition — but the very core of why we play games is social connection. When people come to play one of our games they become part of a community, they share something with their friends, they compete against them, they compete with them, they enjoy the thrill of victory and the agony of defeat; and that’s a pretty special thing. And if you look at the way our players enjoy our games, it’s always done with their friends.

On catering to smartphone audiences and traditional gamers:

The misnomer is that one will cannibalize the other; I can watch TV on my phone but when I’m sitting in my living room in front of a 60 inch TV I don’t watch it on my phone I watch it on the big screen….What we see is not that mobile device is cannibalizing HD gaming, what we see is mobile devices enhancing and extending HD gaming…we are building for a future where every device you own, your phone, your PC, your TV, your internet enabled fridge, will deliver you some form of interactive entertainment.

On his favorite game of all time:

Probably “California Games,” it was this crazy little game that I used to play on my Commodore 64 when I was a kid but it had surfing, skateboarding, hacky sack and then again if I went back and played it now it would be the dumbest game ever. Absolute rubbish. But at that moment, I grew up in a beach town, I’d go surfing with my friends and we’d come home and we’d sit there and have like California games company so I have this memory of this time where some of the greatest friends in my life playing this super simple game but a game that related to what we did in real life, you know skateboarding and surfing and I’ve kinda held on to that. That is kinda the essence of what we do.

To listen to the extended interview, subscribe to the Corner Office podcast.