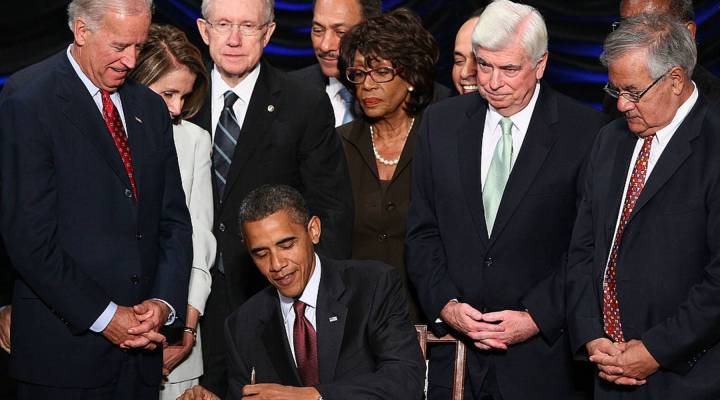 Republicans have announced a financial regulatory alternative they will be pushing as an effort to ditch the Dodd-Frank Act, the 2010 law designed to prevent the possibility of another financial collapse.

The Dodd-Frank Act is in little danger of being set aside during the Obama presidency. But what are the forces Dodd-Frank  set in motion? Its provisions include requirements that banks have more capital on hand to reduce risk from bad loans and those that limit proprietary trading.

Has it made a difference?

One architect of the law said it has succeeded in providing more safeguards within the financial sector.

“Overall, new rules of the road to make the largest financial institutions have bigger cushions and have a system to deal with them if they get into trouble; greater consumer protections; regulation of the derivatives market and these other reforms really are, I think, helping to make the system safer and fairer,” said Michael Barr, a University of Michigan law professor and former assistant secretary for financial institutions at the Treasury Department.

Donald Lamson is another early author of one of the act’s most contentious pieces, the Volcker Rule, which restricts financial institutions’ ability to invest in ways that benefit themselves and not customers. No surprise, perhaps, that he listed the Volcker Rule then among the more successful provisions currently in place. Even so, he sees potential changes to the rule on the horizon.

“If you were going to rationalize what’s been done and put some governance in place, I think you would prune back the Volcker Rule significantly,” said Lamson, now Of Counsel for Squire Patton Boggs.

Lamson said the act has altered the way banks are able to make money.

“Any time you have more regulation, it has the effect of attacks on business activity for those in the market who are subject to the regulations,” Lamson said. “Market participants will pass those costs along, or they will exit the market.”

He said regular consumers can feel those effects in less favorable loans.

“It also has the effect of making the lending decisions of banks more difficult, because a loan has to have twice as capital behind it as it did before, which means it’s twice as expensive for a bank to make to me as it had been,” Lamson said.

Barr said adoption of the new rules has  shielded the U.S. from economic troubles seen elsewhere.

“If you compare, for example, how the U.S. is doing as compared to Europe, the U.S. is doing much, much better than the Europeans, in part because we focused very early on, on recapitalizing our financial system and developing new rules of the road,” Barr said.

Republicans and many big banks disagree, of course.

And Lamson?  He said it’s too early to tell what effect  Dodd-Frank has had on the economy.  “My request would be, let’s see how this continues to play out before we make any additional changes,” he said.