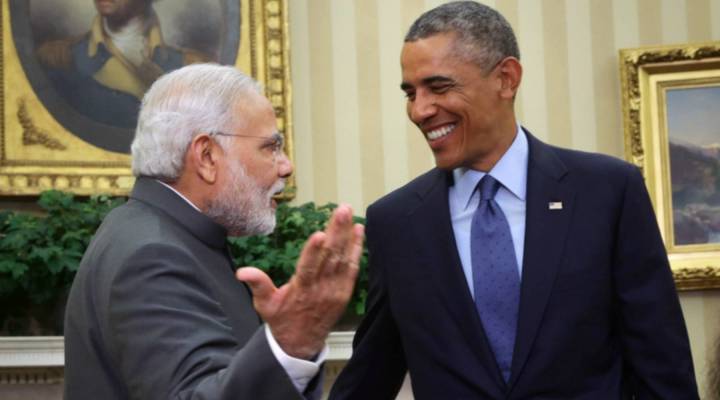 One of the big issues likely to come up during Indian Prime Minister Narendra Modi’s visit to Washington? Trade.

“The U.S. is India’s largest export destination,” said Chad Bown, a senior fellow at the Peterson Institute for International Economics.

He said India would like to keep the U.S. market open to its exports. And it wants more visas for the tech workers it sends to the U.S.  But Bown said President Barack Obama wants something in return: progress on a bilateral investment treaty — an agreement giving U.S. investors in India some guarantees.

The treaty could also help pave the way for U.S. retailers who’d like to set up shop in India. But Modi and Obama will each have an eye on something else as they negotiate. A big, hairy something.

“The proverbial 800-pound gorilla in the room is China,” said Harry Broadman, director of the Johns Hopkins’ Council on Emerging Markets and Global Business.

Broadman pointed out that China’s economy is slowing down, just as India’s is heating up.

“The U.S. and India are conscious about warming up their economic relations,” he said. “As well as security and all these other issues.”

On the security side, the U.S. is selling more military equipment to India, and sees it as an important ally in Asia.  It certainly helps that Modi and Obama get along so well.

The president made a big splash when he danced with some school children during a visit to India in 2010.

Maybe more than friends. Bromance may be in the air.