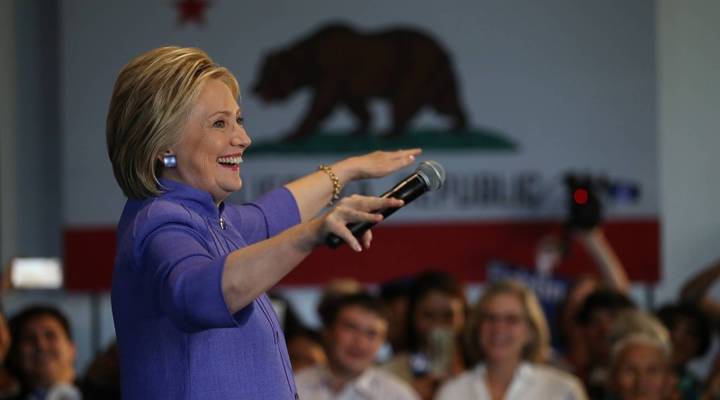 COPY
"I don’t think there’s nearly as much uncertainty about Clinton" because she's "predictable," says Nicholas Bloom of Stanford University. Above, the Democratic presidential candidate speaks at an event on Friday in Westminster, California.  Photo by Justin Sullivan/Getty Images

"I don’t think there’s nearly as much uncertainty about Clinton" because she's "predictable," says Nicholas Bloom of Stanford University. Above, the Democratic presidential candidate speaks at an event on Friday in Westminster, California.  Photo by Justin Sullivan/Getty Images
Listen Now

During presidential elections, there is a lot of uncertainty. The not knowing which candidate will win, as well as how and when their policies will take effect can be a big stressor for businesses. For them, a new president can mean new tax rules and government regulations that could change the way they operate.

Nicholas Bloom is a professor of economics at Stanford University, and studies the impact that this uncertainty has on the United States economy. He spoke with Marketplace’s Kai Ryssdal.

On how uncertainty manifests itself:

What we’ve seen is when the newspapers are talking a lot about uncertainty, you see the stock markets are much more volatile. Stock prices are jumping up and down on a daily basis, investors definitely take notice and they get nervous. And we also tend to see investment drops and employment drops. Business are cautious, and they see uncertainty as going up, and they don’t know what’s gonna happen, they tend to pause investing and hiring. So there’s also a real cost to the economy of increased uncertainty.

Bloom’s take on the uncertainty in this election:

When we’ve looked back over the last 30 years, we’ve seen two presidential elections that have spiked uncertainty. It was first Clinton/Bush Sr., then Bush Jr./Gore. They were margain elections, and in both cases it was the new candidates coming to the election. I think in the case of Trump it would be a magnitude larger, because he’s never held political office before. I think the closest comparison would be something like global collapse or Brexit in the UK. I think Clinton’s just much more predictable. She’s been in office before, she’s had a long political career, so I don’t think there’s nearly as much uncertainty about Clinton.