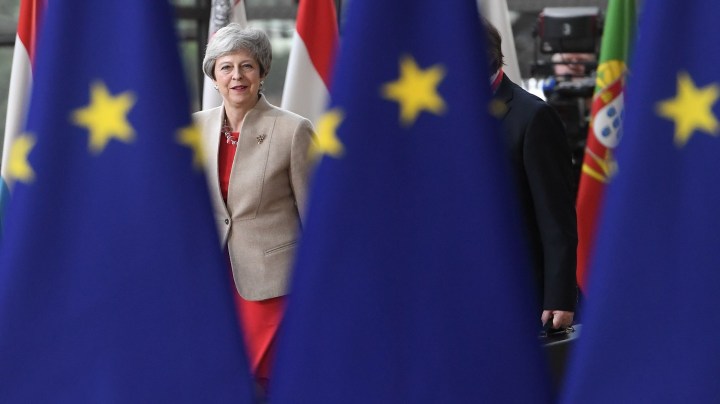 COPY
Britain's Prime Minister Theresa May arrives for a European Union (EU) summit at EU Headquarters in Brussels on May 28, 2019. Emmanuel Dunand/AFP/Getty Images

Friday, June 7 marks the formal end of British Prime Minister Theresa May’s term in office. She steps into a caretaker role while her party spends the next month or so choosing a new leader who will take over the top job in British politics –– and have to deal with the country’s most intractable problem: Brexit.

When May’s tenure began almost three years ago she declared confidently,: “Brexit means Brexit and we’re going to make a success of it.”

But she didn’t, and that led to her announcing her resignation two weeks ago. May’s failure to deliver Britain’s departure from the European Union has not only brought her premiership to an untimely end, it has also left a cloud over the British economy.

“On the plus side, Britain has a very low rate of unemployment and the country’s public finances look pretty stable. But there are some worrying underlying problems,” Arno Hantzsche, senior economist with the National Institute for Economic and Social Research, told Marketplace.

“Investment growth in recent years has been very weak, and that doesn’t bode well for the future.”

Investment in productive assets like plants and machinery has hardly grown at all over the past three years; last year, it actually fell. Hantzsche says he has no doubt that the cause of that was uncertainty over Brexit and the future trading relationship between Britain and its largest trading partner, the European Union.

“The uncertainty over Brexit has meant businesses have not invested, so they’ve hired instead. So we’re actually in a situation where the unemployment is at a 44-year low of 3.8%,” Dales said.

When rising employment is not accompanied by rising investment, the same amount of output is spread around more workers, so productivity growth –– the ultimate indicator of increasing prosperity –– stalls.

“That is precisely what has happened in Britain,” said Vicky Pryce, economic adviser to the Centre for Economics and Business Research and a former adviser to the British government.

“Our productivity growth has been considerably lower than all the other countries that we compare ourselves with, the G7, for example, except possibly Italy, which is appalling,” she said.

Brexit uncertainty, with all its attendant problems, is now the biggest headwind facing the British economy. When May finally leaves office, says Dales of Capital Economics, she will be largely unlamented.

“She will go down in history as the prime minister who failed to deliver Brexit. But it remains to be seen whether the next prime minister, whoever that is, can do a better job of it,” he said.