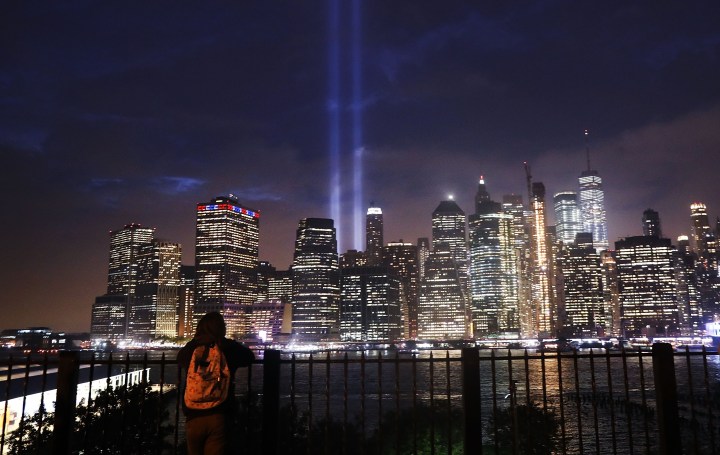 COPY
The Tribute in Light memorial lights up lower Manhattan near One World Trade Center on Sept. 11, 2018, in New York City. Photo by Spencer Platt/Getty Images
The 9/11 Legacy

Tomorrow’s September 11, and of the millions of stories of that day and of the past 20 years, we’ve been trying to find our way to the economic through-line since that Tuesday morning.

We thought about doing the straight-ahead: the costs of the attacks on New York and Washington and Shanksville; the economic damage done in those moments; the costs of the wars we’ve fought since 2001. We thought about all the infrastructure we’ve built in the past two decades, the TSA, the hardened buildings and all of the new inspections and regulations — financial and otherwise.

And then I went back to listen to our stories from this week in 2011, and I found this:

Our generation asks, ‘What were you doing when the Twin Towers fell,’ in the same way that a generation ago asked, ‘What were you doing when Kennedy was shot?’ So to me, I think that impact is so much greater than any economic impact — how it affects our soul. And that’s funny for an economist to use that word, but to me, I think that’s what I think of when I think of September 11.

That’s economist Brock Blomberg on this program 10 years ago when he was at Claremont McKenna College. Today, Blomberg is the president of the California Institute of Integral Studies. And so we gave him another call.

“There are much deeper, you know, impactful economic things than terrorism, in terms of impacting the economy. And I think over time, people desensitize themselves to that. The uncertainty is still there,” Blomberg said.

“Now, looking 20 years later, you realize 9/11 was the first ripple in a series of incredible uncertainty shocks,” said Nick Bloom, an economist at Stanford where he studies, among other things, uncertainty. “Which, of course, were followed by the global financial crisis, followed by the pandemic and followed by Trump. I mean, those three events show up on most measures as an even bigger burst of uncertainty than 9/11. So, if you feel that things are probably more uncertain than they have been for a long time, you’re probably feeling about right. That seems to be the case for America.”

It’s not just that the uncertainty has been piling on us for 20 years; it’s also the kind of uncertainty. Economists talk about uncertainty in a few different ways.

“One you can think of almost like risk,” said Bloom. “It’s things that are uncertain, but you know the distribution. So, imagine rolling a fair dice. Any one of the six numbers has a one-in-six chance. It’s like going into a casino. It’s uncertain what number the roulette wheel is gonna come up to, but you know what are the possibilities are.”

That’s kind of what it’s been like covering this economy for the past 20 years. I could make a pretty good guess about what this corporate move or that was going to be, what the Fed was going to do, or how consumers were going to react, but underneath it was a different strain of not knowing.

“9/11 felt very different in it’s what economists call Knightian uncertainty,” said Bloom. “It’s something you just never conceived of, and certainly anyone I personally talked to would never think of terrorists hijacking planes and flying them into multiple buildings.”

And there’s even, kind of ironically, a nod to Donald Rumsfeld here, too.

Unknown unknowns are just much harder to deal with.

The story of September 11 in this economy isn’t straight ahead. It’s not just the absolute costs, the dollar amounts, or the extra time some things take. It’s that uncertainty Nick Bloom and Brock Blomberg are talking about. The not-knowing for businesses and governments and us. And 20 years of that, and who knows how many more years, just takes a toll.

The 9/11 Legacy
Tags in this Story
Share this Story