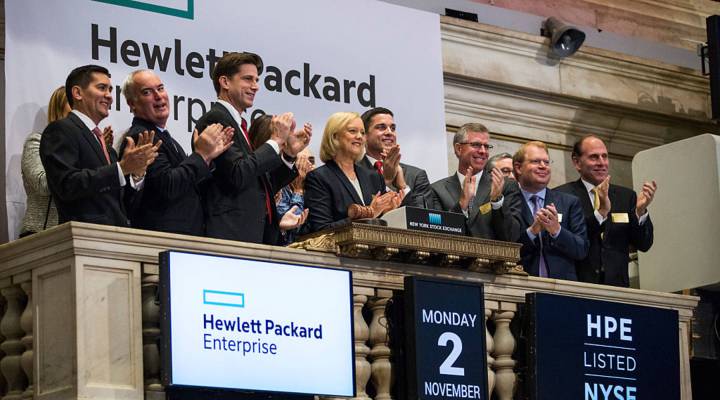 A new spin-off of the tech giant Hewlett-Packard is in the offing.

Last year, the company completed a separation of its personal computer and printer businesses from its corporate-focused products and services. The latter took the name Hewlett-Packard Enterprise. Now HP Enterprise is selling off its business focusing on call centers and maintaining networks for clients.

The all-stock deal with the Computer Sciences Corporation will create a new, as yet unnamed, company worth roughly $9 billion.

Over the past decade and a half, Hewlett-Packard bought up a number of big firms, including computer maker Compaq and tech services firm Electronic Data Systems—an acquisitions spree that some criticized.

“It looks like Hewlett-Packard hasn’t been on the forefront of innovating or coming up with ideas but merely trying different businesses to attach, bolt on and then get rid of as they move forward,” said Peter Cowen, managing director of Clear Capital Advisors, an investment banking firm in the technology sector.

Cowen said the tech consulting services now getting spun off could potentially be a valuable business line– a kind of Trojan horse that companies use to make inroads with clients.

“That segues to them being able to sell additional software, hardware and other sorts of custom products,” he said.

But Cowen said HP Enterprise didn’t make its tech services work as well as other big companies, like IBM, have.

IT services can be costly and hard to scale because of the human capital involved, according to Crawford Del Prete, chief research officer at IDC.

“You have a certain number of people you need to deploy on a project. Then you sign another project and, guess what? You need to deploy another 1,000 people, and that means hiring them,” he said.

The remaining company, HPE, will now focus more on things like servers and cloud infrastructure.

“As society’s needs change and consumers’ interests change, you have to move with it all and adjust to the changed world,” said Jeff Sonnenfeld, senior associate dean of the Yale School of Management.

Sonnenfeld said investors benefit from the spin-offs by getting shares in better-focused companies.