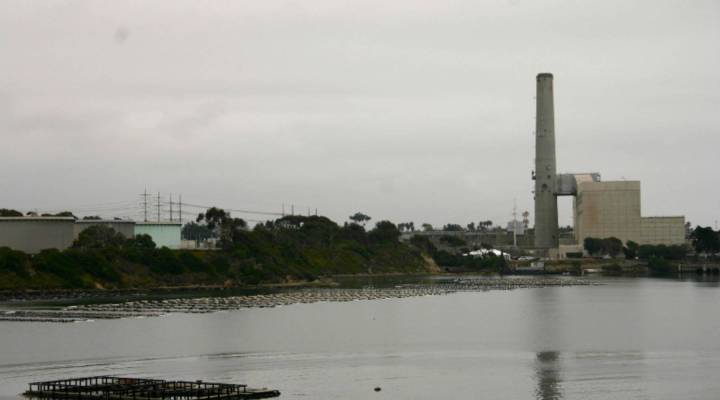 COPY
The site of the Carlsbad desalination plant. Bovlb/Wikimedia Commons

In Southern California, fresh water is constantly in short supply. But the San Diego area can now tap into a resource that’s not dependent on rain — a new $1 billion desalination plant that is the largest in the Western Hemisphere.

“We bring 100 million gallons of water through our intake pump system and up the hill to the desalination plant,” said Jessica Jones, spokesperson for Poseidon Water. “We get a 55 percent recovery. We turn half of it into fresh drinking water.”

Poseidon built and operates the desalination plant, which supplies San Diego County with about 10 percent of its drinking water.

“San Diego County imports almost 85 percent of its water,” Jones said. “This is the only water supply in the county that is truly drought-proof. We are not dependent on rainfall or snowpack.”

In the process of reverse osmosis, the facility uses 16,000 membranes to remove salt and other impurities from the water. All of that state-of-the-art equipment comes at a cost.

“The water coming out of the desalination plant is approximately $2,000 an acre foot,” Jones said. “Imported water right now is about $1,000 an acre foot. So, right now, it’s about twice as expensive.”

Some environmentalists object to the plant’s environmental impact. The intake system “sucks in fish and other sea life, and also sucks in their eggs and kills them,” said Marco Gonzalez, a lawyer for the Coastal Environmental Rights Foundation.

Jones conceded that some fish are hurt. “It equates to about a pound and a half of adult fish per day,” she said. “Or the daily diet of one pelican.”

Gonzalez said the county should focus on conservation and other alternatives before turning to expensive desalinated water.

“The best bang for our buck, whether it’s on energy use or on rates or on the environment, is to recycle sewage into drinking water,” he said. “And we have a lot of projects moving forward to do just that.”

Environmentalists and Poseidon Water are squaring off again about 50 miles north, in Huntington Beach, where the company proposes to build another desalination plant.