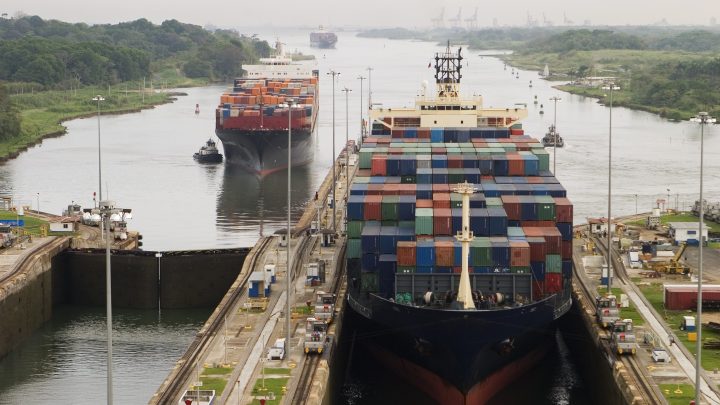 COPY
Freighters enter the Panama Canal on the Atlantic side. As droughts and storms become more common, the canal needs to find fresh sources of water and new ways to store it.  Searagen/Getty Images
A Warmer World

Freighters enter the Panama Canal on the Atlantic side. As droughts and storms become more common, the canal needs to find fresh sources of water and new ways to store it.  Searagen/Getty Images
Listen Now

When it was completed in 1914, the Panama Canal nearly halved the travel time between the U.S. West Coast and Europe and revolutionized trade and travel in the Western Hemisphere. Some 15,000 ships still go through the manmade channel each year, but changing weather patterns are affecting the supply of water used to operate it.

“One of the things that Panama has through the Panama Canal Authority is a time series of rainfall that goes back to 1880,” said Steve Paton, a scientist at the Smithsonian Institution in Panama City, which works closely with the authority.

“In the last 22 to 24 years, we’ve had eight of the 10 greatest storms, the two driest years and the single driest three years in a row. So we’ve set all kinds of records.”

As droughts and storms become more common, the canal needs to find fresh sources of water and new ways to store it.

The canal is immensely important for the Panamanian economy, but diverting precious water from other parts of the country to sustain it is still very controversial.

Between the Pacific and Atlantic oceans in Panama are mountains, on top of which are huge artificial lakes. Water is released from these lakes down to the locks to raise the ships. On average, 37 ships go through the locks each day, using more than 2 billion gallons of water. But the canal also provides drinking water to more than half the country.

“The water of the canal is also the source of drinking water for Panama City,” said environmental lawyer Rodrigo Noriega. “As Panama City grows, there is less water for the canal. So the canal is under a lot of stress to find new sources of water.”

The canal authorities are carrying out feasibility studies on a number of options, including deepening existing artificial lakes to capture more rainwater or desalinating seawater. One possibility being studied is building a dam on the Indio River, which could displace thousands of small farmers.

In the region of Cocle, in central Panama, a group of small farmers have walked three hours along muddy roads to speak about their plight.

“All of us who live in this region depend on the land. What will we do if they flood our land? Where will we go?” said Diego Herrera, who farms a plot of land in the town of Coquillo. “We are against this because they haven’t explained to us where they will relocate us. “

It’s important to emphasize that the dam is only one of many options under consideration, and the canal authorities stress that they will opt for the solution that has the lowest environmental and social impact. But as the climate crisis continues to change weather patterns, this marvel of 20th century engineering will have to find ways to adapt to the 21st century. Global shipping — and the Panamanian people — are both depending on that.