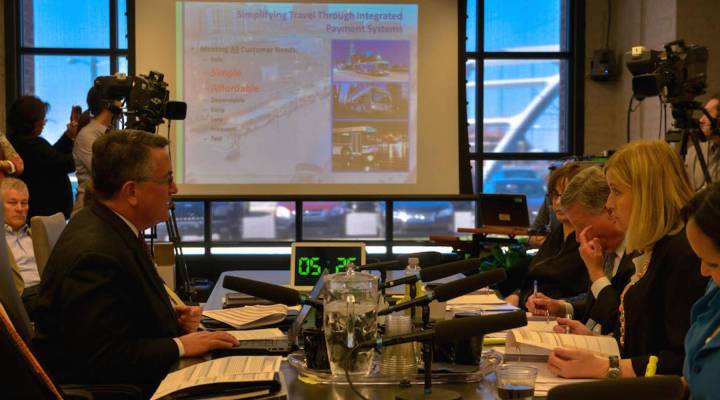 It’s not often the mundane task of government budgeting is compared to an episode of “Shark Tank” — the reality TV show for entrepreneurs. But there’s been a shake-up in Nashville.

The city cut back on its typical budget hearings — think long recitations of dollar figures and people in the audience falling asleep — for a new sort of “pitch night” for government departments that want funding. The new mayor, Megan Barry, said the experiment would push her agencies to act a little more like startup companies and require them to demonstrate exactly how their projects would pay off for citizens.

“This isn’t a gimmick,” she said, while introducing the pitching sessions. “It’s actually a really innovative way to think about the budgeting process.”

At her urging, departments had to team up to present ideas to improve city services. And they had to pitch to Barry and a crowd while on live local TV, with the clock ticking. They were given seven minutes — max.

“This is not: ‘We’d like you to stay to seven minutes.’ This is not: ‘Please try to keep it to seven minutes,’” city budget analyst Sam Lovison said. “This is: ‘The air horn will sound at the end of seven minutes and you’ll be dragged off the stage.’” Lovison advised department leaders to be punchy and well-researched. He drew on lessons he’d learned from a five-month class that the city sent him through at the Nashville Entrepreneur Center, which also provided its founder to serve as a judge on the pitching panel.

When the day arrived, there wasn’t actually an air horn, but the ticking down of a green digital clock was hard to ignore. Some presenters raced through their remarks — like a local judge who speed read her material about sending fewer low-level criminals to jail. The judges gave her a moment to catch her breath before asking questions.

Meanwhile, city health director Bill Paul finished early — then wouldn’t cede the microphone to the mayor as she thanked him. “Hey, I’ve still got 24 seconds!” he said.

“You do,” the mayor said. “You can enlighten me with 20 more seconds.”

“I really, really think that the time for change is now, mayor,” he continued, “and I’ll keep talking until my time is up.”

The health director’s big idea was to station a nurse in every public school (at an annual cost of $12 million). The pitching process did drum up about three dozen proposals, including synchronizing traffic lights to reduce congestion and wiring public housing with high-speed internet.

Yet while the mayor pushed for new ideas, some just couldn’t be made very flashy — like a proposal to adjust the bus schedule to attract a few more riders at night.

You can find a full list of pitches here.