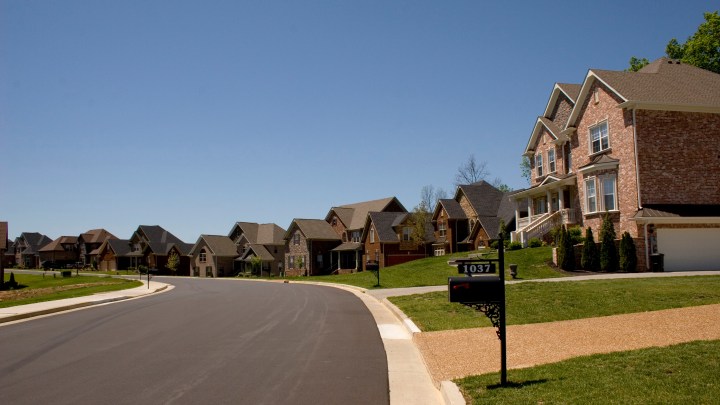 Ellen Mahurin’s suburban Nashville townhome is a classic 1980s build with two spacious upstairs bedrooms. But she’s been sleeping on her couch because there’s not enough room for her and her two teenagers.

“I needed to find it fairly quickly after my husband and I separated,” she said. “And it’s two bedrooms. So, this is my bed.”

A year and a half ago, she was paying around $1,200 in rent. She could afford it, she said, with an $80,000 salary as an independent animal behavior consultant. Now that she’s a full-time receptionist making a little over $15 an hour, the rent is about half of her income.

She’d like to buy, but the median price for homes in Nashville is $480,000, according to Greater Nashville Realtors. Mahurin said she can’t afford that.

Nashville, like many cities across the country, is a hot real estate market. A June report by the mayor’s affordable housing task force found that the conditions make it hard for people with little capital to purchase a home.

The housing shortage is also making it hard for individual renters to become buyers, according to Ken Chilton, a Tennessee State University associate professor.

“You can’t save for a down payment to take advantage of any programs that might be there for low-income households, just because you don’t have the disposable income to do that,” he said.

One reason houses are out of reach is because out-of-state investors are hopping into the South and Southeast.

Chilton said his research found that five real estate investment corporations own more than 5% of the single-family housing stock in Rutherford County, just outside Nashville. Four out of five of those companies are from out of state.

In some neighborhoods, those companies own closer to 50% of the single-family homes built since the year 2000; that tally doesn’t include other properties like condos and Airbnbs.

Nashville’s not alone. Chilton said that single-family home inventory is tight throughout the country.

“So all of this on the demand side means there’s more capital chasing X number of housing units,” he said. “On the supply side, we haven’t caught up with the demand post-2008.”

Nashville officials say they’re working with nearby governments to think through local solutions. But they have limited financial resources.