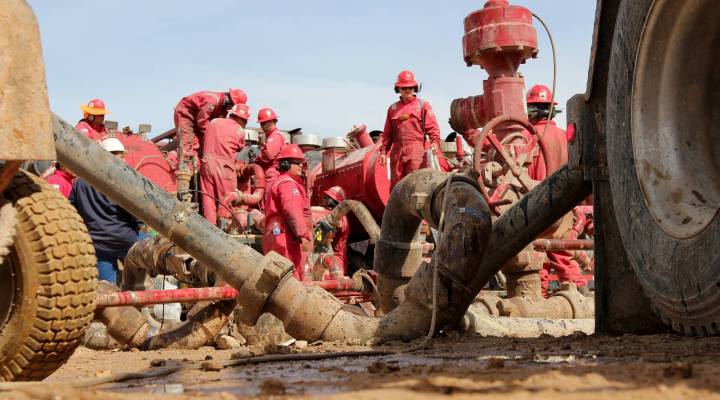 COPY
A frack operation in the Permian Basin of Texas, the nation's highest-producing oilfield. The Basin was once the floor of an ancient seabed that today is laden with hydrocarbons. Lorne Matalon/Marketplace

A frack operation in the Permian Basin of Texas, the nation's highest-producing oilfield. The Basin was once the floor of an ancient seabed that today is laden with hydrocarbons. Lorne Matalon/Marketplace
Listen Now

The deep fall in the price of crude oil means hundreds of thousands of people are no longer working in the energy business, and many small and mid-level energy companies are in a race against bankruptcy.

Yet, oil production is not dropping in the Permian Basin of west Texas and New Mexico, the nation’s highest-producing oilfield. This is where the din at a frack operation near Midland signals the soundtrack of a complex technology that’s allowed the United States to reduce its dependence on foreign oil.

“This is the heart of the operation right here,” said Sam Sledge, technical operations manager at Pro Petro, a drilling services company based in Midland. He showed me through a field that had been transformed by pipes, trucks, 2,500-horsepower pumps and dozens of scurrying workers.

Sam Sledge is both an MBA graduate and a Technical Operations Manager at Pro Petro, an energy services company. He says the players that survive the downturn will inherit the business of those that don’t when energy prices rebound.

During the oil boom, when the price of crude jumped to more than $100 a barrel, there were about 30 fracking companies working this oil field. Today that number is less than 20. Sledge says the market may be hurting, but the technology of what’s called the “horizontal play” is still working and constantly improving. The term “horizontal play” refers to drilling down, then sideways, extracting crude along that horizontal drill.

“It’s just been trial and error with this new horizontal play in west Texas over the last 5 to 10 years, to just dial it in to where we’re going to get the most out of the rock as possible,” Sledge explained with respect to the increasing efficiency of the technology.

Sledge showed me a trailer arrayed with computers and real-time charts monitoring the flow in the pumps connected to the well.  “Fourteen different pumps on location, shift gears, throttle up and down. All of that is where you can control the horse power from, right here,” he said.

As of April 2016, the US rig count has fallen by more than 60 per cent since crude oil prices began trending downward in 2014.

As an industry, drillers are working to raise efficiency. One example is 3D seismic readings, physics and software that pin down exactly where oil is, which means more fracks are successful. So despite low prices and a plummeting number of rigs working the Permian Basin, oil production is still rising.

Fewer companies are doing the work. But those that remain can benefit because of those that have left.

“Right now it’s a pretty simple battle for market share,” continued Sledge, who has an MBA from Baylor University. “It’s in our interest to survive because the companies that are going out of business are going to, in turn, give us their business when we turn back around.”

Until then, survival means slashing costs, said Russell Gold, senior energy reporter at the Wall Street Journal and currently a fellow at the Energy Institute at the University of Texas at Austin.

“The first thing you do is you get on the phone with everyone you do business with and you try to get a cut-rate,” he said as he laid out possible defensive strategies companies deploy in a downturn.

A wellhead near Stanton, Texas. The rig count in the Permian Basin has fallen by 50 per cent since April 2014. Production is projected to start falling soon. But currently it’s rising, which gives rise to the expression, “the drilling treadmill.”

Gold is also the author of “The Boom: How Fracking Ignited the American Energy Revolution and Changed the World.” He said, “You make the case that, look, this is a major recession for the oilfield and everyone’s got to cut.”

He said banks are also scrambling. “There are a lot of regional banks right now that have a lot of oilfield loans out there. They don’t want to see everyone go belly up. So they’re going to be in the business of selectively cutting some deals. You’re going to go to your banker and say, ‘Please, please give me more time, let’s renegotiate, let’s work this out.'”

I spoke with Dale Redman, Pro Petro’s CEO, in his office in Midland. He is charismatic and exudes enthusiasm for the energy business even as it is buffeted by headwinds.

“It is going to work itself out. It is a cycle,” he said. “And just about the time everybody says it’s over, it comes back.”

Redman takes the long view. “You have to look at this as a marathon, not a sprint,” he said, explaining his take on an always cyclical business.

This oilfield worker said he’s grateful to still be working in a downturn. Hundreds of thousands of people in the energy industry have been laid off since the price of crude oil peaked in 2014.

He said that downturns mean companies like his need to forge an even deeper partnership with oil and gas customers who have financial woes of their own. “You have to be in tandem with what they’re trying to accomplish and you better understand what their internal rates of returns are to get those costs down.”

Many people wonder why producers don’t cut production in the U.S. to restrict supply and thereby raise prices. Gold explained many of these companies live under a mountain of debt and don’t have the luxury of that option. “They need to have cash coming in the door to pay off  their loans,” he said. “They can’t just simply stop drilling. If you stop drilling, the cash stops coming in.”

Critics have called the current energy predicament a “drilling treadmill.” What that means is that even in the face of an oil glut and low prices, those who want to survive later must try to stay in the game now.