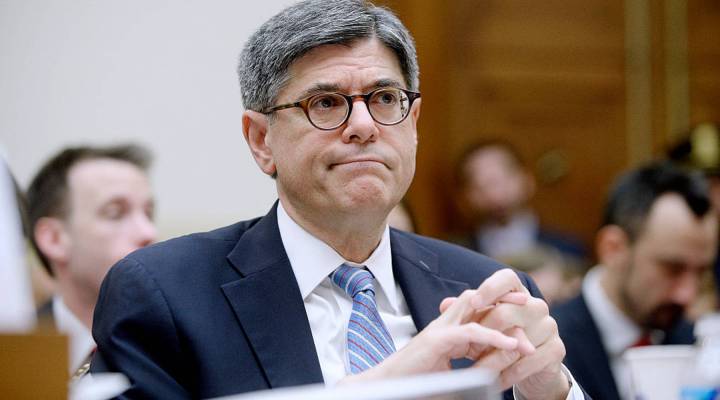 Marketplace headed to the U.S. Treasury building in Washington, D.C. on Monday for a conversation with Treasury Secretary Jack Lew on his  Foreign Affairs op-ed, corporate inversions, MetLife’s “too big to fail” status and changes to the $10 bill. Check out some highlights below, or read the whole transcript here.

On why he disagrees with the MetLife decision:

You go back to the financial crisis in 2007, 2008. Nobody expected the companies that failed to fail. They were not sitting at the edge of disaster. AIG, Lehman. It was a surprise. It came out of the blue for most who were watching. Part of Wall Street reform said that should never happen again.

On whether the Treasury did enough analysis to designate MetLife “too big to fail”:

So I actually think the answer to your question is that we did a very careful analysis. It took a very long time. It took the better part of two years. It was a 300-plus page analysis. So, I feel that the important question here is will we or won’t we have the ability to keep our sights trained on the firms whose failure could cause the damage to the economy that Wall Street Reform was set up to make sure would never happen again, and we’re determined to continue our work in this area and do it well.

On whether companies should have been surprised by Treasury’s new inversion rules:

Look, I think that anyone who has listened to what I have said over the last two-plus years could not be surprised that we were looking to do anything that we could do administratively to stop the pipeline of inversions.

First of all, there has to be fair trade, it cannot be the U.S. auto is competing against an auto that is unfairly subsidized by practices which in a good trade agreement aren’t allowed. Secondly, we have to make sure that we have the kinds of policies here at home where we provide people with the skills they need to get the jobs that are available in the economy, and where we build the infrastructure in our own society so we can have a growing economy in the future. I think the idea of cutting us off from the world would ultimately shrink, not grow the job opportunities.

Want a little more? Find out what Lew said when asked point-blank: Is Hamilton gonna stay on the $10 bill?