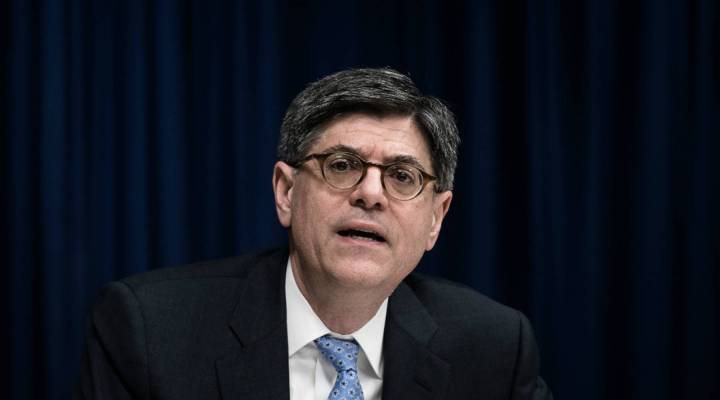 U.S. Secretary of the Treasury Jacob Lew attends a round table discussion during a visit to Hong Kong in March this year.  PHILIPPE LOPEZ/AFP/Getty Images

U.S. Secretary of the Treasury Jacob Lew attends a round table discussion during a visit to Hong Kong in March this year.  PHILIPPE LOPEZ/AFP/Getty Images

It’s been eight years since the financial crisis and the U.S. economy is still in recovery mode, though it may be the envy of Europe, China, and other countries around the world.

Earlier this year, Treasury Secretary Jack Lew spoke to us about America’s role in the world economy and tax inversions (when companies purchase foreign companies to change their tax liabilities).

We caught up with him again to discuss our country’s economic health. Lew spoke to Marketplace Morning Report host David Brancaccio at Queens College on Monday about when to expect the next downturn, Apple’s tax bill, and whether it’s time to say goodbye to the penny.

Some key highlights from the event:

David Brancaccio: The other day, I was on the line with the European Union’s head of competition. And she said a certain Cupertino, California-based company that makes the telephone in probably many of your pockets, had an illegally sweet deal from Ireland, and ordered Apple to pay Ireland back $14 billion in back taxes. Now it’s true Ireland didn’t ask for the money, doesn’t want the money, but you don’t like that ruling either. Why not?

Jack Lew: I understand what’s driving the European Commission. They’re offended – as am I – that companies can take advantage of tax loopholes and tax havens, to reduce their tax bills to very low rates if not zero. Why am I bothered by what they did? A couple reasons. First of all, we don’t make tax policy retroactively. Reaching back and making tax policy that changes the rules 10 years after is just not the way tax authorities work. Secondly, that revenue should be U.S. tax revenue. It’s U.S. income, it should come home, and it should be taxed. And, you know, I’m pretty protective of our tax base. I think that if there is a problem, we should work as the kind of nations of the world together to solve it. We shouldn’t be doing things that reach into each other’s tax base.

Brancaccio: Now I’m not sure that there’s economic data that underlies the following adage in financial markets, but it is said that a big financial crisis happens every seven years, on average. How worried are you about something big happening soon, and are you most worried about the spark that might light it coming from abroad?

Lew: When Great Britain/ United Kingdom voted to leave the European Union, there were a lot of concerns that that might spark a set of financial worries. I think what you saw was a number of very important things. First, there was very close coordination amongst central banks, amongst finance ministers, amongst financial institutions to make sure that in the days following the vote, no one had to worry about liquidity, and the accelerant of fear was taken way down. I think that the major financial centers are in a better place across the board than they were before the crisis.

Student Q&A — on whether the U.S. should continue making the penny:

Lew: The penny does cost more to produce than a penny. Most pennies end up in a jar or in a shoe box. But people are still very attached to getting exact change. It’s a multi-year process, if you were going to remove pennies from circulation. And I think that that we have done a bunch of work that won’t get completed in our time, but sits there and is ready to be picked up by somebody else. There’s always more work to do.