Who hasn’t bragged to a friend about the awesome deal they found at the thrift store? The thrill of the hunt becomes part of the connection to that “Saturday Night Fever” t-shirt, or original “FDR for President” campaign button.

But can that magic hold up when you find something on a website?

Goodwill, the king of thrift shops, is betting they can recreate that feeling. It’s part of an image revamp and they’re putting many of their most valuable donations up for auction to the highest bidder.

The Goodwill mothership for the San Francisco region is in a massive, bustling building.  But in a quiet basement room, with tables covered in gold, jewelry and piles of coins, employee Janique Lee is using a spectrometer to evaluate gems, donated necklaces and pendants that won’t ever see the shelves of your local thrift shop.

“It may be marked 14-carat gold, but when it’s tested it’s not always 14-carat gold,” Lee said, holding up a necklace from Tiffany and Co.

But if you want that Tiffany necklace, you’ll have to check out shopgoodwill.com. And since the non-profit’s mission is to maximize the value of every donation they get, you’ll have to bid on it, along with thousands of other high value items.

Employees sort out jewelry at the Goodwill’s headquarter.

The website is used by more than 100 regional Goodwills — that’s more than half of their stores. Brett Bartschi , vice president of the retail division of Goodwill of San Francisco, San Mateo and Marin counties, said Goodwill also sell on eBay, Amazon and other sites.

“We were getting amazing product through our donations that if we placed that in a local store, it’s only going to receive the amount of attention of the number of customers coming through that location,” Bartschi said. “Versus online; you’ve got hundreds of thousands of people that are online every day shopping that might see that product and be willing to pay more for it.”

For San Francisco, the effort is paying off. E-commerce has become 10 percent of their overall business. The Portland, Ore., area Goodwill is setting the gold standard; its online sales total more than a million dollars a month.

But one challenge is that clothing — which makes up 70 percent of Goodwill’s donations — doesn’t re-sell well on the internet.

Workers sorting through items at Goodwill.

Suzanne Ruff, who was coming out of the flagship San Francisco store with her arms full of goodies, is a perfect example of why. A frequent Goodwill shopper, she had no idea that the organization sold online.  Would she try it?

“No, it’s just fun coming in here,” Ruff said. “You have to try it on, otherwise you end up giving it away.”

So how can Goodwill satisfy the in-store craving, but still maximize the price for unique items? That’s where the boutiques come in.

“They have this opportunity to connect with millennials who have this kind of social component to their shopping, so who better positioned to do this than a Goodwill?” Biesada said.

Goodwill wants its piece of the $200 billion that millennials spend every year. And so far, it’s been working. The site has been growing at more than 15 percent annually. There’s a site redesign scheduled for later this year and in 2017, there will be, of course, an app for that. 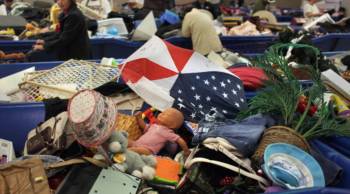 Marie Kondo may be a boon to the resale industry