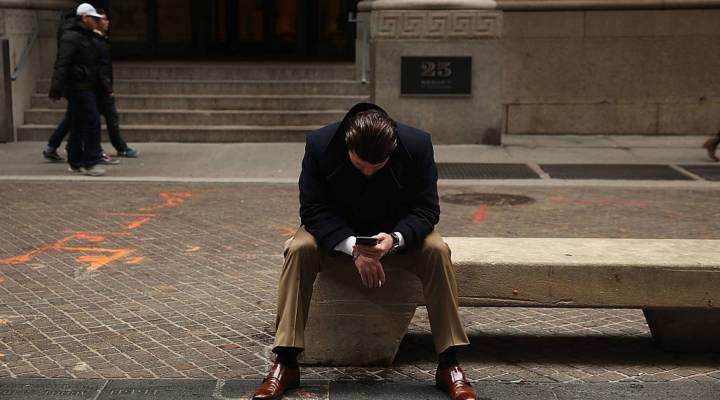 COPY
With volatile markets and lots of closures in 2015, it's a hard time to be a hedge fund. Spencer Platt/Getty Images

With volatile markets and lots of closures in 2015, it's a hard time to be a hedge fund. Spencer Platt/Getty Images
Listen Now

More hedge funds closed their doors in 2015 than at any time since the financial crisis, according to new research from HFR.

“It certainly is a desolate landscape,” said Steven Davidoff Solomon, professor at UC Berkeley. “What can only be described as a slaughter.”

Hedge funds have historically demanded high fees from institutional investors for high performance, hedging against downturns and profiting during upturns. But, said Davidoff Solomon, “it’s getting increasingly difficult to outperform the market.”

Assets are increasingly correlated, for example.

Additionally, volatility has been down for many years, and volatility is often an opportunity to earn short term profits.

Mark Spindel is CEO of Potomac River Capital, a hedge fund that manages $600 million in assets. He said that the economic landscape has become much more complicated in recent years. Central bank policy innovations, from timing to negative interest rates, from Japan to the United States, has become more inscrutable and “markets generally now are still just kind of in this funk,” he said.

There are thousands more hedge funds than there were in the 90s so they can’t charge the same hefty fees (often nearly two percent of investment and 20 percent of returns) they once could, so it’s harder to turn a profit.

“The economics of running these firms is different from what it was pre-crisis,” Spindel said. “The regulatory costs are higher and the revenue structure is lower.”

When mega hedge fund Long-Term Capital Management went belly up almost 20 years ago, it threatened to take a lot of financial institutions with it because they had lent the hedge fund money.

“We’re not seeing that now,” said Nicholas Tsafos, an audit and accounting partner at EisnerAmper. Many funds are simply closing up shop, as opposed to failing because they lost much of their money, limiting the knock on effects. But the connections between institutions are also weaker.

“A lot of it has to do with the financial crisis we went through and the capital requirements these institutions have to have.”

So maybe some lessons were learned, pointed out Davidoff Solomon. “I know it’s hard to believe!”