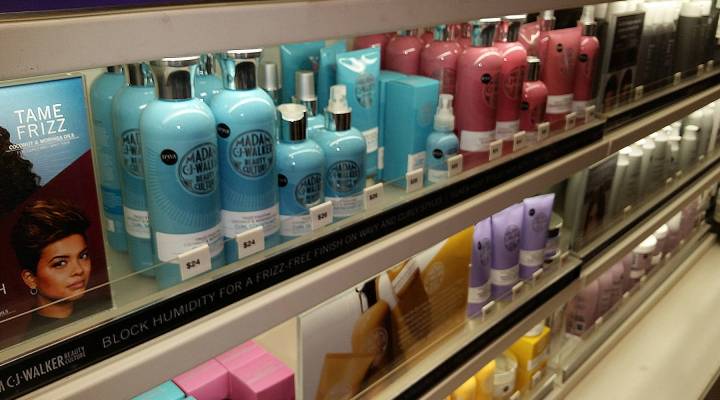 The nation’s first female, self-made millionaire, Madam C.J. Walker died in 1919. She made her fortune selling products to African American women in the early 1900’s. Now, nearly a century later, a line based on her original concept is on the shelves at beauty giant Sephora. It is the latest entry in a multi-billion dollar industry.

“I love it,” Yates said as he washed his client’s thick, tightly coiled hair, preparing to turn that mass of curls into a bone straight bob. He’s been using it at the trendy Mario Diab salon in New York’s Soho for a few weeks, and believes the products have made a huge difference in the manes of his multi-cultural customers.

“Most of my clients are natural clients with curly, coily and heat-styled hair,” Yates said.

Natural hair refers to hair that is not chemically-straightened, which is the way many women have worn their curly hair for decades. Global research firm Mintel reported that the black hair care industry was worth 2.7 billion dollars in 2015 – up seven percent from 2010. It ties the expansion in the market to the increase in natural hairstyles, which often means consumers add more products to their daily routine. Sales of relaxers dropped 19 percent from 2013 to 2015.

Sundial Brands created the line and is known for products formulated specifically for black hair, like Shea Moisture. According to CEO Richelieu Dennis the company has grown at a rate of 50 to 60 percent over the past 6 or 7 years — because it is focused on the consumer.

“There’s a consumer that’s been so underserved and in most cases ignored by the larger, more mainstream brands,” Dennis said.

But he thinks this is beginning to change, as larger brands such as Revlon and L’Oreal are now developing products targeting African American women and the natural hair movement.

A’Lelia Bundles, Madam Walker’s great, great granddaughter, gasped when she first saw the new product line on the shelves at a Sephora store in Chevy Chase, Maryland. She said she loves everything about it, including the name.

“Madam Walker always called her agents beauty culturists because they were cultivating hair growth,” she said.

Bundles is also excited over the product design, which includes a disc reminiscent of the round tin in which Walker sold her original “Wonderful Hair Grower.”

Walker was born Sara Breedlove in 1867, the daughter of Louisiana sharecroppers. She took her name, Madam C.J. Walker, after marrying her third husband. Her home-made products were sold directly to African American women. Bundles said the presence of the line in Sephora stores reflects the growing customer base of women like her, who don’t wear their hair straight.

Bundles said her great great grandmother would be over the moon to see her products on the shelves at Sephora.

Yates said the Madam CJ Walker collection is about stretching the hair and giving it ultra hydration without weighing it down.

“I’m a little intimidated by my natural hair, styling it myself,” said Azie Dungey, one of Yates’ clients. Dungey is an African American woman with very tightly coiled hair that she wears straightened by a blow dryer, but says Yates has made her a fan of this line.

“Watching him wash and condition my hair, I was like, ‘oh yeah I can totally do this!’” Dungey said.