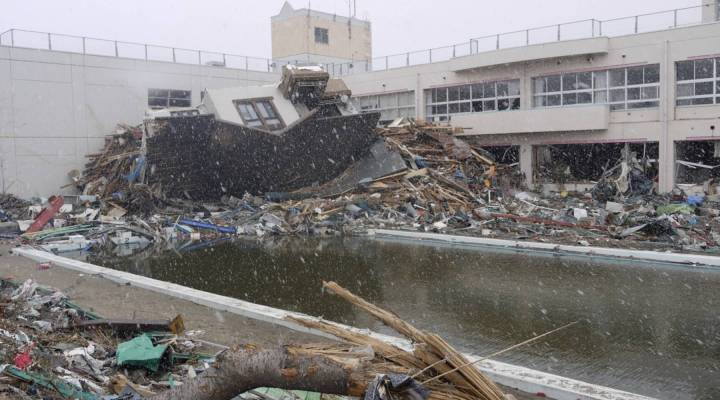 Excavators are still clearing the neighborhood where Nakano Elementary once stood. Five years ago when Marketplace Correspondent Rob Schmitz arrived here soon after the tsunami had lain waste the neighborhood, a house lay upside down in the school’s swimming pool and more than a dozen cars stacked against its doors.

The school clock was frozen at 2:46, the minute the earthquake knocked out power, making way for a 30 foot-high wall of water that slammed into the neighborhood.

In the days after the tsunami, the Nakano Elementary clock was frozen at 2:46pm, the minute a 9.0 earthquake hit, cutting power to the city.

“My students and I watched from the school roof,” remembers Nobuo Takeshita, a sixth-grade teacher at Nakano at the time. “The children saw their homes being washed away. I still remember the crashing sound of their houses slamming into the school.”

An hour earlier, Mr. Takeshita pleaded with his students to remain calm while Japan was hit with its most powerful earthquake on record, registering 9.0 on the Richter scale. Mr. Takeshita took his students to the school’s roof while hundreds of panicked people from the surrounding neighborhood followed. Minutes later, the tsunami hit. “Some of the students saw their own parents being washed away,” said Mr. Takeshita. “They asked me to do something to help, but all I could say was: ‘It’s alright. You’re going to be OK’.”

Hundreds of people in the neighborhood died.

A search-and-rescue team looks out onto a Sendai neighborhood obliterated by the tsunami in 2011.

84-year-old Yoshio Chitose was one of the fortunate ones. His house was destroyed, but because the foundation remained, he was allowed to rebuild in what the city of Sendai declared a ‘danger zone,’ a designation he disagrees with. “The last time this area had a tsunami that big, it was a thousand years ago. I assume we’ve got at least 400 more years before another one hits,” said Chitose.

In the distance stands a 20-foot-high sea wall that Mr. Chitose thinks would likely prevent another tsunami. Chitose’s frustrated with the pace of recovery in Sendai. His house and four others, the only surviving structures in the neighborhood, are surrounded by an expanse of dirt being cleared for a commercial project. He wishes the city would rebuild his neighborhood instead. “It’s dumb to turn this into a commercial area,” he says. “It’s a beautiful place. The weather’s mild, you can see the sunrise over the ocean. It should be a neighborhood.”

That’s what taxi Driver Kazunobu Kosai is looking for. He and his family are among thousands here still living in temporary prefabricated housing. The 65-year-old is working past retirement in order to make enough money to support them. “In the two years after the tsunami, Sendai’s economy held up,” said Kosai. “We had a lot of outside help, but now everything’s slowed down. I’m still waiting for a house. I’m worried about the future.”

Mr. Nobuo Takeshita still teaches at Nakano Elementary’s new location. He helped save dozens of students’ lives when he brought them to the school roof once the tsunami hit.

But Nakano Elementary’s Mr. Takeshita has hope for Sendai. His school has moved to higher ground, and so have his students who survived the tsunami. They will graduate from high school next year. “They learned the importance of life,” said Mr. Takeshita. “They learned the importance of helping each other through the toughest times. In Japanese, we call this ‘Kizuna.’”

The word refers to the bond between people. At the end of March, Nakano Elementary will close for good. Mr. Takeshita is the only teacher from that time who hasn’t moved away. “The others had to leave to take care of their families,” he said, pausing to take a breath. “We all agreed one teacher had to stay with the students until the school closed, and I felt it was my duty to stay…”

Five years ago, more than a thousand people in Sendai died, including several parents of Mr. Takeshita’s students. But Mr. Takeshita kept their children safe. And he’s stood by their side ever since.