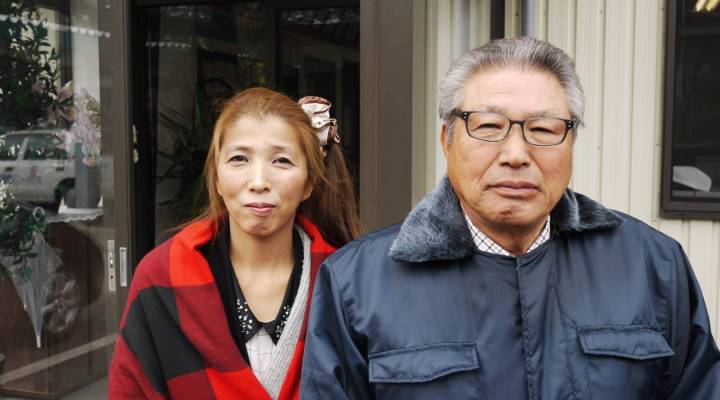 The last time I saw Tatsuo and Emi Sato, the father-daughter owners of Smile Smile Taxi, there wasn’t much to smile about. More than a hundred of their taxis had been washed away by a 30-foot-high wall of water, several of their drivers were missing, and they had just spent the evening trapped on the second floor of their office, watching their fuel tanks explode over a sea of debris.

“I remember calling the police, but they were too busy picking up hundreds of dead bodies that were floating by our office, so dozens of us stayed upstairs overnight and waited,” recalls Tatsuo Sato.

The next morning, they found a dead body in one of their taxis, but it wasn’t one of their drivers – it had floated in from the next neighborhood. In the end, all of Smile Smile’s drivers survived. Emi and her father look at pictures from five years ago, swiping through one photo after another.

“Look at all those ramen noodles! And all those bottles of Sake!” laughs Emi Sato.

Hundreds of castaway packages of instant ramen and bottles of sake from nearby factories had washed up to Smile Smile’s office, giving them their only thing to eat and drink while they were stranded.

Matsuo Sato stands below the water level immediately following the 2011 tsunami that ravaged the city of Sendai.

Smile Smile Taxi sustained a $17 million dollar hit from the tsunami. Most of its taxi fleet was gone, its workers dormitories had collapsed, and the office was partially destroyed. Boss Matsuo Sato, who was 70 years old at the time, thought the tragedy was a sign he should retire and liquidate the company.

“My wife cried and begged me to close up shop for good,” he said. “She said ‘We’ve got enough savings to live on without working one more day of our lives.’ I considered it, but when I thought about how my workers have helped me so much over the years, I just couldn’t do that to them.”

Sato secured special low interest government loans to help rebuild Smile Smile Taxi, but in the process, he learned that some of his workers weren’t as devoted to him as he felt he was to them.

“I could’ve laid them off – I didn’t have any taxis left and they had little to do – but I didn’t,” Sato said. “I bought them rice, ramen, and cooked meals and fed them during the tough times. I felt that trust was the most important thing we had. But about half of them quit without saying anything. They just left. I felt a little sad and betrayed.”

In the two years following the disaster, government assistance helped provide an economic boost to Sendai’s economy. Underneath the reconstruction efforts, though, local demographics were shifting. People of working age were leaving the area, worried that living here was no longer safe for their families. Japan’s problem of an aging population suddenly became magnified for Sendai.

“The average age of our employees is 61!” Emi Sato said, aghast. “We just calculated this, actually. It’s never been this bad. Many young families picked up and left.”

It was just months after the tsunami: employees were leaving, the company was in debt, so Boss Sato took a look around and realized Smile Smile could no longer get by on taxis alone. A Smile Smile employee fixed one of the company’s new trucks in the company garage. Dump trucks and heavy machinery were in high demand as government money poured in to rebuild the region.

Smile Smile Taxi owner Matsuo Sato stands in front of his new fleet of dump trucks and heavy construction machinery. Sato invested in these vehicles to capitalize on the rebuilding of the region.

In 2011, Sato used a government loan to buy 70 new trucks. The investment paid off: Smile Smile’s revenue has rebounded to pre-tsunami levels. Boss Sato gives  a tour of the new office handling the truck side of the business, warmly greeting his employees. Unlike the flimsy metal siding protecting Smile Smile’s taxi office, this three-story structure is made with steel and glass.