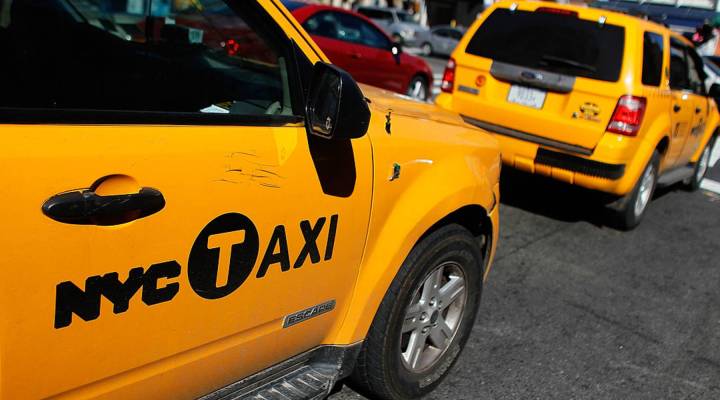 As ride-sharing apps like Uber and Lyft have become more popular, ridership in New York City’s yellow taxis has dropped by nearly 30 percent in the past three years. And that means financial hardship for the people who own taxi medallions — the metal plaques that permit someone to drive a cab — along with huge losses for the financial institutions that fund them.

On 8th Avenue in Manhattan, Qudratullah Saberry is sitting in the driver’s seat of his cab across the street from a hotel.

Saberry owns the cab he’s driving and its taxi medallion. He bought it for about $300,000 in 2012. Its value spiked and he borrowed against it. Now, with two kids to support — one in college — plus a mortgage, he said he’s not sure he’ll be able to make his loan payment this month.

Qudratullah Saberry, 63, says he can’t afford the payment on his yellow taxi medallion loan this month.

New York City started selling taxi permits, later called medallions, around the turn of the 20th century. They gave drivers the exclusive right to pick up passengers who hail them on the street. Medallion owners could drive a cab or lease one out, taking a cut of the profits. With no competition, yellow taxis were guaranteed to bring in a steady stream of fares. Michael Woloz, from the taxi advocacy group the Metropolitan Taxicab Board of Trade, said that made the medallion valuable.

“It outpaced every index on the stock market. It was a solid investment,” he said.

Medallion prices trended up over time. In 1947, they cost about $2,500. By mid-2013, people were paying just over a million dollars to buy one. Medallions for fleet owners cost even more. Woloz said someone could buy a medallion and cash out for retirement. And medallions could be used as collateral to buy a home, send kids to college, open a business.

“It really allowed so many people in New York, particularly immigrants that built something from nothing, to put the building blocks in place so that they can keep moving up and up and up the ladder,” he said.

Banks saw these collateralized-loans as low-risk.

“It was this sort of faith-in-the-market-never-changing that led the banks to have lots of confidence,” said Meera Joshi, the commissioner of the city’s Taxi and Limousine Commission.

Medallions are now selling for as little as $400,000, many in foreclosure sales, far less than their peak value. And a lot of medallion owners aren’t making enough money to pay back their loans.

“They’ve come to us asking for relief,” said Robert Familant, the CEO of Progressive Credit Union. Eighty-five percent of its loans involve taxi medallions. The credit union is allowing some borrowers to pay what they can afford for now. That’ll probably mean taking some losses. “But that’s the economics of our current circumstance, and that’s the best way to keep our members owning the medallions paying on their loans,” Familant said.

Medallion owners argue that Uber and Lyft impinge on a taxi’s rights without having to follow the same regulations. Nino Hervias, 58, is a taxi driver who owes $540,000 on his medallion loan. He argues there’s essentially no difference between hailing a cab and requesting a car through Uber.

Nino Hervias, 58, owes about $540,000 on his medallion loan. He argues that Uber and Lyft should be regulated like yellow cabs.

“At the millisecond that you press that button, you’re calling the attention of the driver as if you were on the street raising your hands,” he said.

Uber spokesman Matt Wing said the app has expanded access to neighborhoods that were underserved by taxis, and that’s more important than worrying about the price of the medallion.

“Because ultimately, all that does is serves the interests of banks and medallion owners,” he said.

In Manhattan, as Qudratullah Saberry waits for someone, anyone, to flag him down, he said he’s thinking about filing for bankruptcy this summer. As for his future?
“I have no retirement,” he said. “I think the rest of my life I go to welfare.”

Saberry said at this point, his medallion is just a piece of metal.