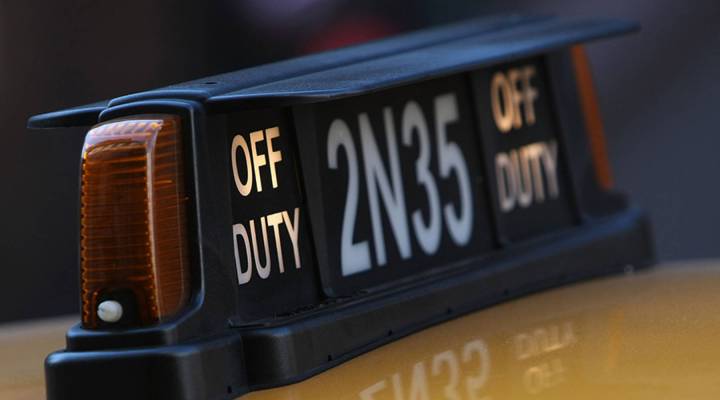 Big data is powerful. A recent analysis of over 500 million New York City taxi rides found evidence of informal communications between the Federal Reserve Bank of New York and major financial institutions around the time of Federal Open Market Committee meetings. David Finer, the study’s author, says that increases the probability of information leaks from Federal Reserve officials. Finer is a PhD candidate at the University of Chicago Booth School of Business. He talked with Marketplace host Kai Ryssdal about using taxi data to examine the relationship between banks and the Fed.

Kai Ryssdal: Do me a favor and tell me about first of all this data set that you plowed into — what is it, where do you get it, and you know all of that.

David Finer: I was trying to find inspiration for a second year paper. And I came across this treasure trove. It contains records on just about every yellow cab ride in New York City from 2009 until — for this paper — the end of 2014. It has details on pickup times, drop off times, the GPS coordinates of the pickup and drop off. It is a remarkable records of New Yorkers at work and at leisure.

Ryssdal: Yes, so the correlation you made is — or the study you made — the data you drew is big financial institutions and the Federal Reserve Bank of New York, right? Tell me what you found.

Finer: I look at where people are picked up in the vicinity of the New York Fed and the vicinity of one of the major banks and they are dropped off very close together in space and very close together in time. And I see increases around monetary policy meetings of rides to the New York Fed from the banks and also lunch time coincidental drop offs for people from the New York Fed and from the major banks converge on some point in the city and generally where I find the increase is in areas associated with dining and shopping like Soho, like the Meatpacking District.

Ryssdal: The issue here really is what you call information leakage between the Federal Reserve System and commercial banks, informal exchanges of information.

Finer: That’s certainly what one might infer from what I’m seeing. I can’t observe information flow but I provide evidence of an increase in opportunities for information to flow.

Ryssdal: Now we should say the New York Fed says this is ridiculous and it’s outrageous to draw these conclusions. And also there is some merit to bankers and regulators knowing what each other are talking about, right?

Finer: Yeah. As for the New York Fed’s response just about every empirical paper faces those sorts of criticisms and I would love to hear specific feedback from the New York Fed on this. And yeah I definitely agree that that there are benefits to communication and I’m certainly not suggesting that people at the New York Fed should not communicate. The big question here is whether well-connected firms might be able to profit at the expense of others around these monetary policy meetings.

Ryssdal: And it also is relevant that data leakage is a known problem with Federal Reserve System, the head of the Richmond Fed had to resign over data leakage problem. I mean it’s not like this doesn’t happen.

Finer: Yeah and I’m not suggesting by any means that there’s intentional leakage of confidential information or any sort of malfeasance but every interaction, even a social one, entails the risk that commercial bankers might gain even accidental insights — something as simple as a look of discomfort if a question is raised that touches on confidential discussions.

David Finer is a PhD candidate at the University of Chicago Booth School of Business. He studies under Prof. Luigi Zingales at Booth’s Stigler Center for the Study of the Economy and the State.