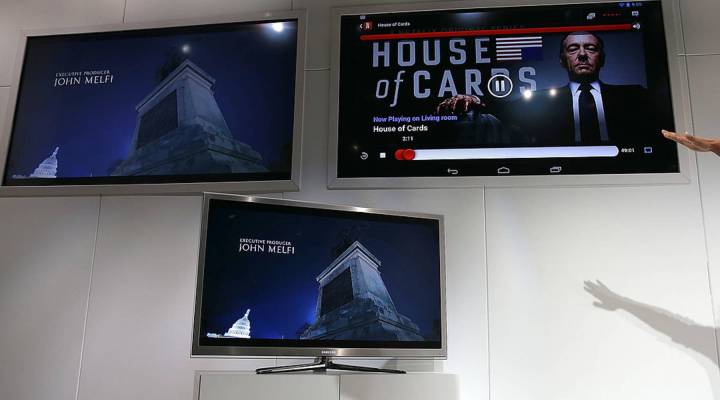 When audiences met Frank Underwood, back in 2013, he was putting an injured dog out of its misery. “There are two kinds of pain,” Underwood said straight into the camera. “The sort of pain that makes you strong.  Or useless pain, the sort of pain that’s only suffering. I have no patience for useless things.”

“I think in many ways that first episode of ‘House of Cards’ does provide a real metaphor for the changing media environment,” said Robert Thompson, a television professor at Syracuse University.  “All kinds of things are going to happen now, but it isn’t going to be pretty.”

Netflix sunk $100 million into that first season of “House of Cards,” hiring a big-name director and well-known actors like Spacey and Robin Wright.  The show marked the first big success for high-quality, online-only television and helped usher in streaming services as legitimate players in the industry.

It also planted the seeds of cord cutting.

“It was a huge wake up call, that here was a big new threat, the internet, and it was finally good enough to really be a significant business,” said Marc Tayer, author of “Televisionaries: Inside the Chaos and Innovation of the Digital Revolution.”

“House of Cards” also fueled what would become an all out battle for original content.

Today Netflix, Amazon and Hulu produce dozens of shows; many of them as good, or better, than what’s on the networks and cable.

“It’s led to sort of a feeding frenzy with more money chasing the best writers, the best directors, the best actors,” said Tayer.

And, a feeding frenzy for viewers.

Sure, there have been TV marathons for decades.  We couldalways  binge watch “24” on DVD, and stockpile episodes of “Friends” on our DVRs to play back later in bulk.

But with “House of Cards” Netflix gave consumers control over new programs at the start of the season. Letting us decide when, and how much, political scheming we want to watch at once.