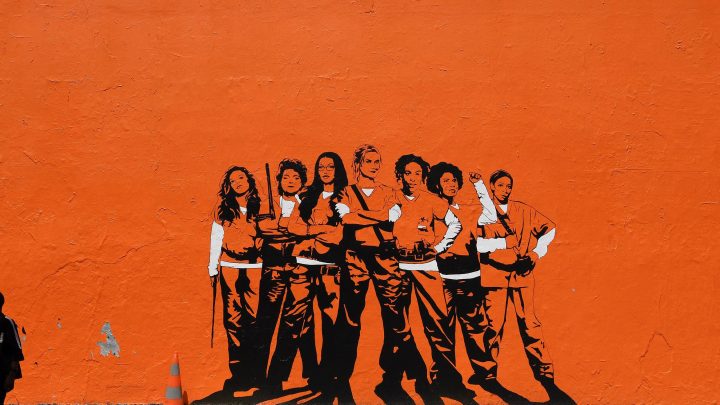 COPY
A mural depicting the Netflix series "Orange Is the New Black" in 2017 in Paris, France. Christophe Archambault/AFP/Getty Images

A mural depicting the Netflix series "Orange Is the New Black" in 2017 in Paris, France. Christophe Archambault/AFP/Getty Images
Listen Now

Before all of them, there was “Orange Is the New Black.” Its seventh and final season launches Friday.

The show is about a couple dozen women who are serving time in a federal prison, including Piper Chapman, who was convicted on drug charges.

In 2013, Netflix dropped all 13 episodes of the first season at once. At the time, that was pretty groundbreaking.

“‘Orange Is the New Black’ really kind of instituted this notion of binge watching,” said Alfred L. Martin Jr., who teaches media studies and African American studies at the University of Iowa. “And the idea that we don’t have to wait a week to see what happens next to Piper and company.”

Netflix noticed this kind of behavior on its own platform.

“Netflix had seen some evidence of people doing that on the network and cable shows that they were carrying,” said Elana Levine, a media studies professor at the University of Wisconsin-Milwaukee. “People would just watch episode after episode.”

So it decided to try this new model with original shows. “House of Cards” came first, and then a few months later, “Orange Is the New Black.”

The show was very bingeable. It had lots of cliffhangers and complex, relatable women.

It was such a breath of fresh air to have an ensemble cast that was so varied in their perspectives and experiences, said Alisa Perren, who teaches television studies at the University of Texas at Austin.

It quickly shifted its focus from Piper, who’s wealthy and white, to a diverse set of characters — other women who were black, white, Latina, Asian, LGBTQ and who came from many economic backgrounds.

Netflix says more than 100 million people have watched “Orange Is the New Black.” Many of them will no doubt be binging it this weekend.