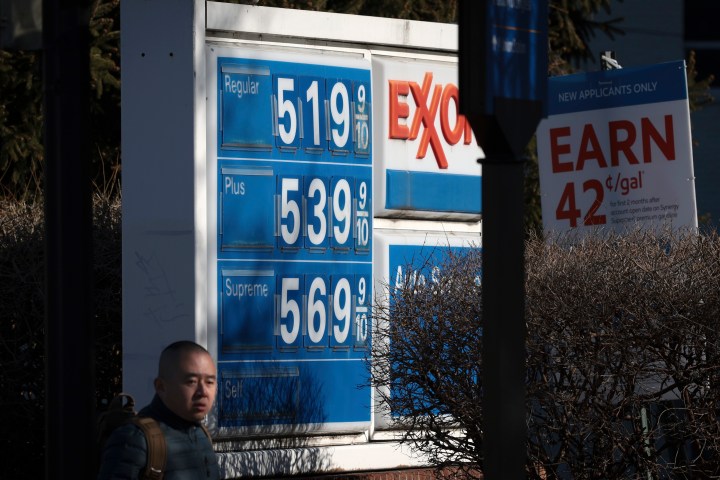 COPY
Prices for gas at an Exxon gas station on Capitol Hill are seen in Washington, DC. The cost of gasoline continues to rise across the globe and in the United States due to the Russian invasion of Ukraine and continued inflation associated with the global pandemic. Photo by Win McNamee/Getty Images

Prices for gas at an Exxon gas station on Capitol Hill are seen in Washington, DC. The cost of gasoline continues to rise across the globe and in the United States due to the Russian invasion of Ukraine and continued inflation associated with the global pandemic. Photo by Win McNamee/Getty Images
Listen Now

Executives from Exxon, Chevron and other big oil companies are fresh off of Capitol Hill. They were there last week to discuss high gasoline prices. Some accused them of price gouging. However, lowering the price at the pump isn’t just about big oil making a small amount less.

Many in Congress are ramping up their criticism of oil companies saying they should be using their growing profits to help American consumers. Former Labor Secretary Robert Reich, made one such argument on CNN:

“If you got so much money that you’re buying back your shares of stock, why not use that money to, instead, to reduce the price at the pump?” he asked.

Morgan Bazilian, who heads up the Payne Institute at the Colorado School of Mines, said, “I don’t know if that has any precedent at all.”

“To somehow come up with a regulatory or policy process that hypothecates or moves specific funds from one place to a public sector consumer protection, that does seem sort of convoluted to me.”

He added that political posturing on this issue is predictable. When gas prices go up, certain things go down.

“The president and politicians from both parties will start to talk about price gouging, how hard hit the American people are. And they will, you know, speak in rhetoric around getting to the bottom of it,” said Bazilian.

He said high gas prices are certainly affecting consumers in the U.S., especially those who can afford it the least. But getting those prices to come back down?

“It’s not that easy. There’s very little policy can do,” said Ryan Kellogg, teaches environmental policy at the University of Chicago. He said the spike in gas prices is due to a supply shock. Russia’s invasion of Ukraine has taken a lot of oil off of the market.

“And then at the same time, demand is increasing as the U.S. and a lot of other countries are pulling out of the pandemic,” Kellogg said.

Often when prices go up, demand goes down. But gasoline demand is somewhat inelastic – people need to get to work, to school, to the grocery store.

“Given the fact that Americans are consuming, you know, 400 million gallons of fuel a day, there’s not a whole lot of breathing room that’s in the system,” said Patrick DeHaan, a petroleum analyst at GasBuddy.

Some states have temporarily suspended the gas tax or suggested the federal government give gas cards or tax credits to people who own cars. Kellogg said there’s no question those measures will work to put more money in people’s hands.

“Do they work in terms of solving the bigger problem, which is, fuel prices are high and we’re continuing to use lots of gasoline and diesel? No. And if anything, they make it worse,” he said.

Why? Because, Kellogg said, it’s putting money in people’s hands, specifically so they can buy more gasoline – something we ultimately need to be doing less.