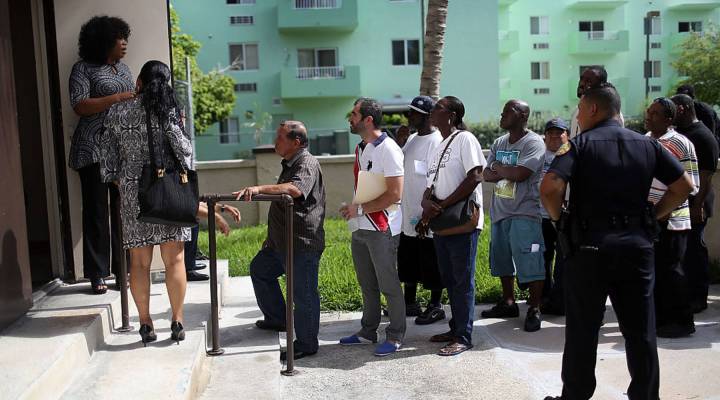 COPY
People lining up for a job fair in Miami in 2015.  Joe Raedle/Getty Images

People lining up for a job fair in Miami in 2015.  Joe Raedle/Getty Images
Listen Now

After the employment rout of the Great Recession, the U.S. economy started adding private-sector jobs again in 2010. Since then, 14 million private-sector jobs have been added—to a level  of 121 million, 5 million higher than the pre-recession peak.

But jobs in the public-sector—in federal, state, and local government—kept falling for several years after the Great Recession and Obama Stimulus ended, and the economic recovery began. After accounting for the short-term blip in federal hiring of temporary census workers in 2010, the number of government workers is still approximately 300,000 below pre-recession levels.

The lingering deficit in public-sector employment has had an uneven effect by race and gender, said Steve Kreisberg, director of collective bargaining at AFSCME (American Federation of State, County and Municipal Workers) — the union representing more than one million government employees.

According to a study of government layoffs published in 2012 by the progressive Economic Policy Institute, women suffered 70 percent of layoffs, while African-Americans suffered 20 percent.

“Government jobs, particularly at the federal level, on average pay higher than in the private sector,” said William Rodgers, chief economist at the Heldrich Center for Workforce Development at Rutgers University. “Since we’re pulling back a disproportionate share of African-Americans and women, we would then see wages of minorities and women deteriorate.”

And the impact of those government wages and benefits over a lifetime of employment can be considerable.

Tomas Rivero, 54, of Portland, Oregon, is a case in point. Rivero works as a wildland firefighter for the U.S. Forest Service. He’s been fighting fires across the West — in the Cascades and Yellowstone, around small towns and on Indian reservations—for nearly thirty years.

“It is a good income,” said Rivero, “you can live very well.”

Rivero said in a typical fire-season — working from spring through fall — he can make $60,000 per year or more. Plus, he gets health insurance and a government pension.

That’s very different from his early working life as a young adult, after returning to the U.S. from Mexico, where he grew up (Rivero was born in the U.S. to Mexican parents).

“I did the most menial jobs,” said Rivero. “I started as a janitor at Woolworth’s in downtown L.A., then I moved to a factory where we painted figurines.”

Working as a firefighter, Rivero eventually saved enough money to buy a house in an up-and-coming Portland neighborhood.

More than a decade ago, Rivero was enlisted for a project to recruit more black and Hispanic young people from urban areas into fire-service jobs. But in recent years, he said he’s seen government budget-tightening shrink the firefighting ranks, and reverse some of the progress that was made.

“With more availability of jobs, there was more diversity,” Rivero said. “But as the jobs started disappearing, you also started losing a lot of that diversity.”

Tomas Rivero, 54, has been a wildland firefighter for nearly 30 years. The government income and benefits have enabled him to buy his own home and move solidly into the middle class.

Some economists and policy advocates reject the notion that a healthy recovery requires employment in the public sector to grow as much, or as fast, as private-sector employment, favoring job-growth that is generated by for-profit businesses instead.

“Government jobs may have become better in comparison to a lot of private-sector jobs, as the nature of our economy has changed,” said Maya MacGuineas, president of the Committee for a Responsible Federal Budget, a nonpartisan advocacy group in Washington, D.C. “But I wouldn’t say that the answer is therefore, we should hire more people at the federal government level. More private-sector growth is really going to be a more sustainable policy. If you’re talking about just growing government jobs because they’re good jobs—don’t forget, we also have to pay for those government jobs. So that means higher tax dollars for everybody else, or lower government spending in other areas.”

Some minority job-seekers would certainly appreciate a shot at the kind of job—and job security—that government employment has historically provided.

Sharon Peters is 52 and African American. She was recently searching the jobs-database at an office of the Oregon employment department in Portland. She has a job at a newspaper company now, but wants better pay and benefits.

“I would kind of like something with the state or the county,” said Peters. “I did apply, but they get so many applicants.”

Peters said her parents raised thirteen children beginning in the 1950s—on her father’s pay as a merchant seaman, and her mother’s paychecks from a variety of jobs, including managing a daycare, a restaurant and a government program for disadvantaged youth.

The chart above has been updated to more accurately reflect employment numbers.