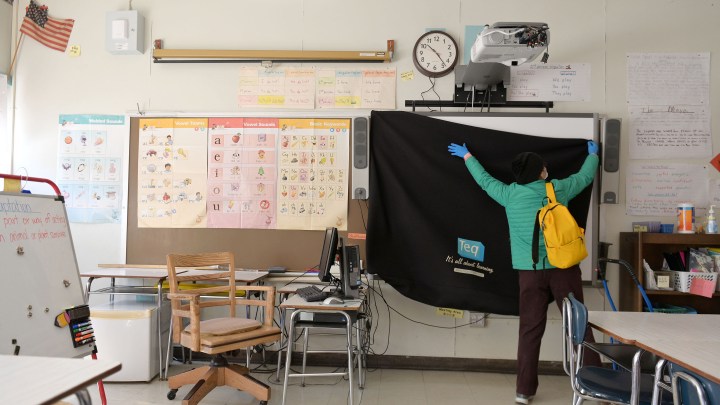 COPY
Some jobs involve school building maintenance with facilities closed, but about half were positions that deal directly with students. Michael Loccisano/Getty Images
COVID-19

Some jobs involve school building maintenance with facilities closed, but about half were positions that deal directly with students. Michael Loccisano/Getty Images
Listen Now

Another 1.877 million people filed jobless claims last week, signaling that the worst may be over for COVID-19 job losses, although unemployment is still inordinately high. More than 42 million recently laid-off people have put in their applications for unemployment since the pandemic shelter-in-place orders began. A new report shows that many people working for public schools are losing their jobs.

Almost 469,000 workers in K-12 public education lost a job in just the month of April, according to the Economic Policy Institute. It’s no surprise that some jobs involve school building maintenance. But about half were positions that deal directly with students: special education teachers, tutors and teachers assistants.

She says the job losses in April were more than the sector saw in the entire Great Recession. They could be long-lasting as states grapple with reduced budgets.

Bruce Fuller, a professor of education policy at the University of California, Berkeley, says further cuts to education — as we saw in the Great Recession — would probably mean larger class sizes and lower teacher salaries.

“These things add up to a decline in overall educational quality, and that sort of affects our whole society’s ability to generate more potent forms of human capital for the private sector,” Fuller said.

That, he says, could make it even harder for the economy to recover in the long run.