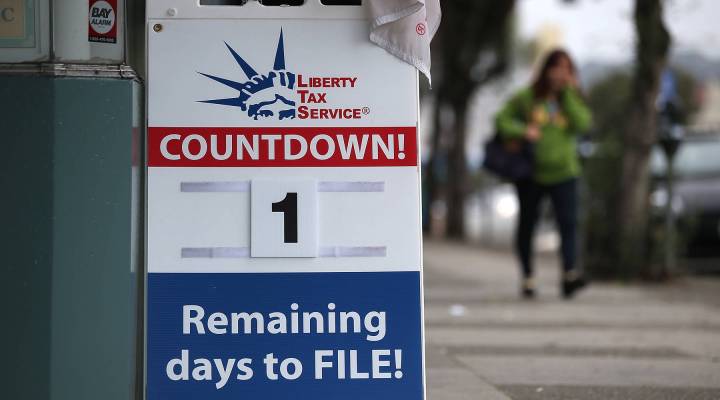 COPY
: A sign advertising one day remaining before the tax filing deadline is posted in front of a Liberty Tax Service. Justin Sullivan/Getty Images

: A sign advertising one day remaining before the tax filing deadline is posted in front of a Liberty Tax Service. Justin Sullivan/Getty Images
Listen Now

This may surprise you, but professional tax preparers are pretty much unregulated.

There have been some investigations lately. In fact, the Justice Department wants to shut down a Liberty Tax franchise in South Carolina. And Maryland’s comptroller won’t process returns from more than 20 preparers.

Taxpayers like 31-year-old year old Meghan Martinez don’t have a lot of options when they have a problem with their preparer.

Martinez is the kind of person who reads something thoroughly before she signs it. This year, she had Liberty Tax Service do her taxes, going to a Liberty office near her home in Raleigh, North Carolina. Martinez found a mistake on her return.

“I realized that the entire cost of goods section on the schedule C was blank,” she said. Let me translate: The cost of goods is what, say, retailers spend on their inventory.

Martinez sells stuff on e-Bay, and she said she spent more than $21,000 on inventory last year. Martinez said after the mistake was corrected, she got a refund. But her Liberty tax preparer charged her $90 more, because an extra form was used.

“She was like, ‘Oh no, you don’t owe me anything additional, we’ll just take it out of your refund,’” Martinez said. “And I’m thinking, but that’s still my money. But they make you feel like it’s play money or something.”

In all, Martinez ended up paying Liberty Tax $198. Liberty Tax general counsel and chief compliance officer Jim Wheaton can’t comment on specific cases. But he did tell me it’s hard for Liberty to discipline people working in their local offices, because almost all of them are franchises.

“They’re not our employee,” he said. “So we don’t have the ability to order the employee to be fired.”

Liberty can report preparers to the IRS. Wheaton said several years ago the IRS tried to implement testing and registration requirements for tax preparers, but federal courts ruled it didn’t have that power.

“It allows a culture of errors and sometimes even fraud to flourish,” she said.

Wu said some Liberty Tax Service franchises are accused of making up expenses and deductions.

Liberty’s Jim Wheaton said those allegations involve less than one percent of Liberty’s tax preparers, and he said he would welcome more IRS supervision.