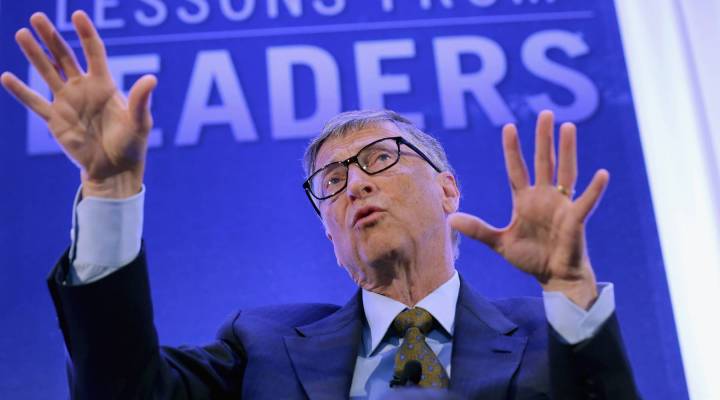 COPY
Bill Gates, founder of Microsoft and co-chair of the Bill and Melinda Gates Foundation, directed his attention towards 15-year-olds in his annual letter to followers of the foundation. Chip Somodevilla/Getty Images

Bill Gates, founder of Microsoft and co-chair of the Bill and Melinda Gates Foundation, directed his attention towards 15-year-olds in his annual letter to followers of the foundation. Chip Somodevilla/Getty Images
Listen Now

In the wake of the climate talks in Paris in November, the Breakthrough Energy Coalition, the billionaire-backed group searching for global energy solutions, is thinking about the future. And Bill Gates, the Coalition’s founder, is writing about it in his yearly letter to followers of the Bill and Melinda Gates Foundation. This year’s letter is addressed to a young audience — 15-year-olds — framed around the question, “If you could have any superpower, what would it be?” Melinda and Bill’s answers, respectively? More time, and more energy. Investing in creating clean, affordable energy will change the world, Gates says.

Marketplace Morning Report host David Brancaccio spoke with Gates about the Breakthrough Energy Coalition and the future of energy.

Brancaccio: Regarding electric power, energy, what is the market failure here that you and some other wealthy individuals are trying to fix?

Gates: We need clean energy that’s incredibly reliable, and most of the renewables we have are intermittent. Being able to store that energy or having some new source that runs 24 hours a day, that’s what we need to solve the climate problem.

Gates: Right. So we start at the research level, government has not increased the energy R&D budget in the face of this need for cheaper energy, energy security, and clean energy. That gives us a more supply on the innovation side. And then we ask the private sector to step up. There’s a big reward there, if you can solve it. It takes longer than IT, but it can still be a profit making activity.

Brancaccio: Yeah it could take awhile. I mean, you need to be a very patient man. You and I could be old old men before you see any of this.

Gates: Right. The best writer on this, Vaclav Smil, reminds us that it’s been more than 50 years in the past between an advance and when it’s largely deployed in the energy system. We need to do better this time, but it does take time, even with something really advanced.

Brancaccio: But I want to understand this — is it a feature or a bug that wealthy individuals feel the need to fund this type of work?

Gates: Well, when there’s profit to be made, which in the long run, there really is here, it’s great for capitalism to fund dozens of different ideas. It’s not like the moonshot where we’ll just take one approach and the technology’s good enough that there’s a really high chance of success. It’s like the early days of the automobile where it could have been the steam car, the electric car, or the internal combustion engine. And firms competed and one won out so dramatically people forget the other two were even tried.

Brancaccio: Sounds risky. You could lose your shirt one this one.

Gates: It is risky. But in IT, 90 percent of the companies that got started went under, and yet the Apples, Googles, Microsofts more than made it worthwhile for those private investors.

Brancaccio: Now, I saw some statistics here: when it comes to Energy R&D, the proportion of funding that the government spends on energy is quite low compared to what it spends on other things like healthcare, and defense…we spend a lot of money on defense R&D, right?

Gates: And the private sector only spends .2 percent. So conservatism of the utilities, the long lead times, the need for scale…it is under-invested in, but the imperative is now very strong.

Brancaccio: Wait, the penny just dropped with me. The private sector, the energy industry spends about .2 percent on R&D. Company that to…the pharmaceutical industry’s gotta spend more than that.

Brancaccio: So arresting climate change is going to be a key motive here, but what will this do if you’re successful to anti-poverty efforts? That’s something else that you’re very focused on.

Gates: Right, that’s why I don’t think the solution is making energy more expensive, because only rich countries can afford that solution. We need to take the billions of people in the world who are so poor, they have no energy access, no light at night, no refrigeration…we need to make energy so inexpensive that they can the transport, fertilizer, all these services we take for granted.

Brancaccio: Well that’s interesting because the fossil fuel industry often argues the best for poor people is the cheapest, and then they say, “Coal is really cheap.” But you’re saying the problem with something like coal is that it has major impact on climate change.

Gates: And I’d like to be even cheaper than coal is today. The cheaper we can make energy, the better that is for people in poverty. They can grow more food, they can get up to a middle class lifestyle.

Brancaccio: Now, the fun part of this is what-if: what if you could turn a wall or a roof into a solar panel with a special coat of paint. That’s one of the things you’d love to see, but what’s this about turning solar energy into a liquid?

Gates: Well, liquids, like gasoline, are magical. The energy density is over 10 times the best battery. And it sits there in a tank, the tanks are very inexpensive. You want twice as much energy, you buy a bigger tank. If you want to move it around, you put it in a truck or send it through a pipeline. It’s actually the best energy store we have today, is gasoline. If we can turn the sun into gasoline, it automatically is available all the time and it uses the infrastructure that’s already there.

Brancaccio: It’s gonna take some research, Bill. We’re not there yet.

Gates: No that one, we’re at the very early stage. It’s not even ready for private companies. But it’s very doable. Nature through photosynthesis does this, and we just want to do it in a more efficient way.

Brancaccio: Are you focusing too much though on the speculative, moonshot part of this, to use a term you brought up earlier? Early stage funding? Some energy experts say that you might be getting it wrong here, that there’s already some fine green technology out there and the big challenge is finding the money to propagate it, to get it out to people. Why are you focused on so early a stage?

Gates: Well, because the economics of this intermittent energy just aren’t good enough. By the time you put the cost of reliability in, and take the tax of subsidization off, you’re still asking for huge premiums. And so the way to look at this is to say ‘What should India do?’ India should get electricity to its people so that the families aren’t breathing in smoke and so that they can keep their food fresh. The basic services that we have, they should get through electrification. And they will do that through coal unless something else is cheaper.

Brancaccio: You mention India right now because they are planning right now for their near-term energy needs.

Gates: And they will go down the coal path. And India’s a great way to think of this because it’s so many people that you can’t subsidize them to use some non-economic stuff, and it’s big enough that their contribution to climate change alone will be enough to increase the warming forever, and so the only way to solve this problem is give them something that’s totally reliable without subsidization, that lets them electrify at a lower cost than using their coal reserves.

Brancaccio: And just so people are clear, when you talk about intermittent, you’re talking about the fact that the wind doesn’t always blow and sometimes you live in a part of the world where there’s not so much sun, or maybe a cloud comes over. You’re looking for something more consistent.

Gates: Exactly. As  you move away from the equator, the seasonal quality of the sun gets worse. There’s always a night, there’s always clouds. When people want to get heat on a cold winter night, they’re not able to wait until the sun comes out.

Brancaccio: But let me just press you on my previous question. What do they call innovation – the valley of death is after the innovation part, getting the stuff to market. Why not put your money at that stage?

Gates: I agree that we need private money for that stage as well. And that’s why these companies will require more capital than the typical software startup. They will take hundreds of millions of dollars as opposed to tens of millions of dollars. And so we will need a larger fund of capital. Now the market’s big enough and the barriers tend to be daunting enough that the rewards of the few who make it through that minefield is gigantic. So I still see it as on-balance, a smart investment. So a few companies are going to need a lot of trust and  a lot of backing.

Brancaccio: Who or what was the was the matchmaker here for this Breakthrough Energy Coalition? Who put the Microsoft guy, the Amazon guy,the Salesforce guy, the woman who runs HP, the first family of Facebook, Branson — Who gets everybody together, how does that work?

Gates:  I called all those people…

Brancaccio: You picked up the phone?

Gates: …and I was hoping that half of them would say yes. In fact, almost every single person I called said, “Hey, if you’re going to make sure that we have a great set of professionals investing this money, and it really is aimed at helping to solve this problem using private sector-type, ruthless, this is the one to back/this is the one not to back type thinking,” they joined up. And so I was super happy with that. And then in parallel, we were asking  governments if they would increase R&D budgets, and we were amazed that 20 governments made the commitment to double over 5 years. So those were new announcements made in November at the Paris climate talks, and no previous climate talk had had anything about R&D spending or anything about private sector risk capital, so I though that was a great addition.