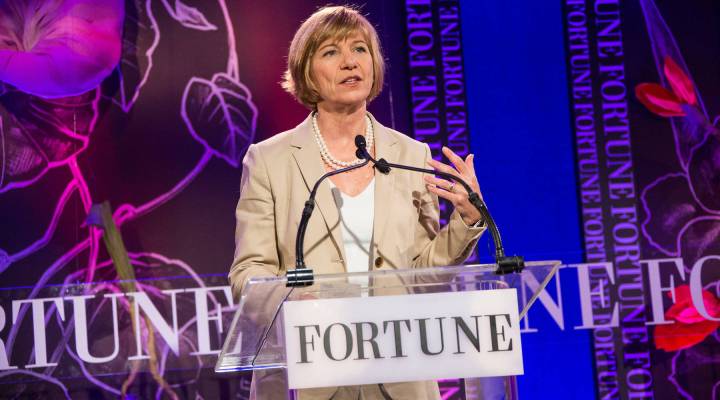 The Bill & Melinda Gates Foundation is the largest private foundation in the world. Launched in 2000, the organization aim to enhance healthcare and end extreme poverty, as well as expand educational opportunities.

Dr. Susan Desmond-Hellmann has served as CEO of the organization since 2014. Prior to joining the foundation, she was Chancellor of the University of California at San Francisco, and spent 14 years at Genentech, where she served in a number of roles, ending as president of product development. She was also appointed to the board of Facebook directors in 2013, and has served on the board of directors of the Procter & Gamble Company since 2010.

Desmond-Hellmann is responsible for translating the goals if the foundation into actions and impact. She spoke with Marketplace about everything that entails.

On how she feels philanthropy is seen in the United States:

Americans have always felt good about generosity. Philanthropy in the US has also always been looked on as asking about what’s behind the potential black box. So I do think increasingly as there’s more philanthropy, more wealth and therefore more opportunities for philanthropy, we’re hearing more questions about influence, more questions about is big philanthropy good philanthropy? I don’t think we’ll be able to achieve our ambitions on equity if we have any dents in our reputation. That is an essential guidepost for me, and Bill, Melinda [Gates] and Warren [Buffet] share in that and act accordingly.

On the areas she feels the Bill & Melinda Gates foundation can improve in:

I think that the biggest improvement I’d love to see is how we balance our sense of urgency with the knowledge of the value of time. When you hear that 2.6 million babies in the world die before 30 days of life, you get mad, and you wanna get on it, and you wanna fix it right away. What I’d love for us to have a better sense of than we do is how to combine that sense of urgency with the appropriate pace. Bill’s been quoted as saying that people overestimate what they can achieve in one year, and underestimate what they can achieve in a decade, and working with others on getting that right is something I’d love for us to be better at.

On the foundation’s impact on the private market:

In fact, one of the things I think is a central tenant of our foundation, and something I’m very enthusiastic about is: we’re in the world to solve problems and decrease inequity. I want the talent, commitment, and passion and power of the private sector to be part of that quest. And we know particular issues suffer from what we call a market failure. There’s not a private company in the world that when they’re talking to their investors say, ‘Wow, this is how we’re gonna make our PNL look good.’  So, can we help companies think about models, and they may be volume guarantees, they may be tiered pricing. Can we use our capital to stack the deck in favor of companies wanting to work on the issues that we work on with a charitable intent.

Desmond-Hellmann discusses more about the nonprofit’s approach toward eradicating poverty in this letter.

CORRECTION: Desmond-Hellmann incorrectly stated a fact during the interview. The accurate information is 2.6 million babies die before 30 days of life, according to the foundation. Additionally, a previous version of this article misstated the year Desmond-Hellmann became CEO. She started in 2014. The text was updated to reflect this information.