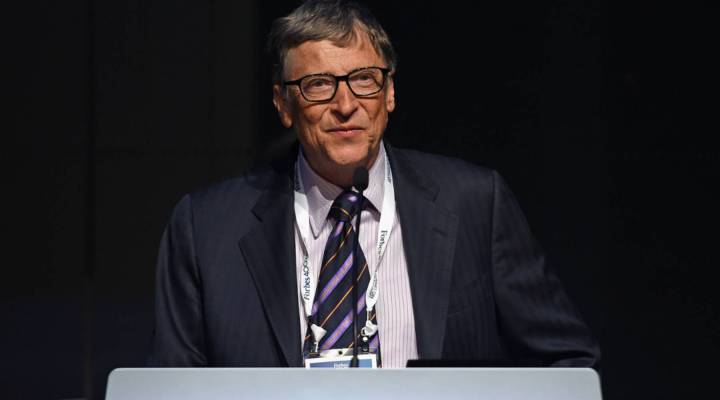 When we last checked in with Bill Gates, he’d just announced a risky and ambitious plan to look for ways to make energy reliable, super clean and super cheap. It coincided with the Paris Climate Change agreement. It’s now a year later, and Gates has turned pledges of good intentions into real money — more than $1 billion — for what he’s calling Breakthrough Energy Ventures. The project will be run by a team of innovators and venture capitalists who will take big risks on long-shot ideas, such as turning sunshine into liquid fuel. It’s like a venture capital fund but with a key difference: more patience.

Gates joined us to talk about the project, potential pushback from energy companies, and energy policy. You can read the full transcript of our interview below:

David Brancaccio: Venture capital, they want their returns a little quicker. You’re willing to be a little more patient?

Bill Gates: A typical venture fund is a six- to 10-year time frame, and they don’t have an active board. Here, we’ve got investors in for a 15- to 20-year time frame. And a lot of these companies, as they build pilot plants and scale up, will have to raise money even beyond what they’ll get from the Breakthrough Energy Ventures. So having us there and connecting them up to institutions like University of California or strategic partners — that’ll be one way we help them get to the incredible scale you need both to affect the climate and to make a super-big success.

Brancaccio: I mean, because that’s the thing. You have more than a billion dollars, but the question is: Is that a lot of money or is it just a little money? Because you’re trying to do something very large and potentially very expensive to achieve.

Gates: So for the venture stage, the early work, a billion dollars is a lot of money. That should let us back many dozen companies. There’ll be an attrition rate there, but somewhere between five and 10 should get to the point where we need to go out and help them get financing from other sources.

Brancaccio: You almost wish you did this 20 years ago, Bill. In other words, do we have 20 years? There’s some people who think time’s running out on some of these issues.

Gates: Well, the best writer on that is Vaclav Smil, who reminds us that energy transitions have historically been 50 years or more. And so here we have to move faster than normal. It’s almost like having a deadline, which in science you usually don’t have. We’ll need a bit of luck to meet that time frame, and that’s why we’re moving everything as fast as we can.

Brancaccio: You and your partners are investing deeply in this technology and this innovation, really in the science here. Do you worry that science – particularly the science that drives energy policy – may become a partisan issue in this next administration?

Gates: Well, I hope not. I’ve been up in the Congress talking to Republicans and Democrats, and I’ve seen that commitment to energy R&D is one of the more bipartisan things. Even if you factor out climate, if you can make energy cheaper, if you can have better energy security, if you have no local pollution, a lot of these advances are some of the best deals you can imagine, and so if you put that framework on, I think we’ll try and make the case to this administration and others that increasing energy R&D is a very smart thing to do.

Brancaccio: Powerful interests though. The incumbent energy companies — do you think they could stand in the way of the deployment of technology that your team discovers and develops?

Gates: No, I don’t think so. In fact, they would embrace something that made energy cheaper. These are huge markets. The opportunities are really incredible. It’s not an easy space, but I don’t have any doubt that if we really invent something, it will get out there. The interest in this is phenomenal.

Brancaccio: I hear it in your voice. An optimism — I’m not exactly sure where you’re drawing the optimism from. But an optimism that you think you’re going to come across something. That this could pan out.

Gates: Yeah, I’m seeing some stuff that I’m thrilled to put money into. And having an incredible technical team that can look into every one of these ideas will let us separate out a few that really have promise.