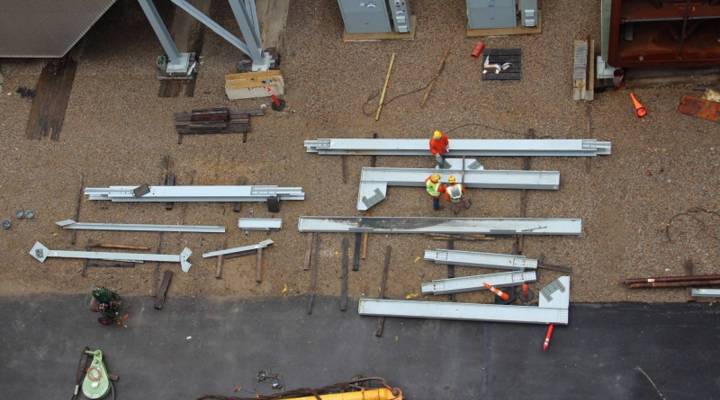 What does it take to keep 100,000 tons of pollution out of the air? At one coal-fired power plant in Pennsylvania, the answer is: lots and lots of air filters.

Sulfur in coal is a big cause of pollution. To take sulfur out of the coal it burns, the Homer City Generating Station — an hour east of Pittsburgh — is putting in thousands of air filters.

Todd Kollross is the lead engineer for the project. In a room high atop a brand new scrubbing unit, he points to the floor, where there are hundreds of holes leading down to the level below. “As you look down, these holes are where all the bags are going to slide in,” he said.

Some 40,000 air filter “bags” will go around tubes like this to screen coal exhaust for mercury, particles and other pollution.

That’s a lot of cash, even for a company like GE, which owns the plant. James Shapiro is a senior vice president with GE Energy Financial Services. “Why’s it so expensive? Just look at the size of this project,” he said, pointing out 300,000 pound sections of air ducts, which can easily fit a small apartment building inside them.

The Homer City Generating Station burns 16,000 tons of coal per day, and feeds the grids that power New York City, Philadelphia and Chicago. At full steam, it can power more than two million households.

“Take your furnace and put it on steroids,” said Kollross. “You’re trying to heat your house, we’re trying to take care of two million homes.”

Around the country, dozens of plants are putting in similar equipment. They’re all trying to meet new clean air rules written by the Obama administration. These include the Mercury and Air Toxics Standards. The Supreme Court recently sent the mercury rule back to the U.S. Environmental Protection Agency  to consider how much it will cost, and then to a lower court to decide its future.

The rules come during dark days for coal. Cheap, fracked natural gas is eating coal’s lunch in the electric power markets. International demand is low. Coal production is at a 30-year low, according to the Energy Information Administration. Some plants have decided to close rather than clean up, but most, like Homer City, are staying open.

The EPA says the costs for the mercury rule will raise electricity rates three percent. But in exchange, it will prevent 11,000 deaths a year, and on top of that, will prevent thousands of cases of asthma and heart attacks, and save the economy billions in health costs.

Sulfur in coal is a big cause of air pollution. To take the sulfur out, The Homer City Generating Station is putting in thousands of air filters.

The rules are yet another setback for coal, which is hurting from low international demand, and competition from cheap, fracked natural gas. Some plants have decided to close rather than clean up, but most are staying open.

James Shapiro said Homer City faced a tough decision when the rules were first announced. “You didn’t have much choice. You basically you either put on the pollution controls or you stop running,” Shapiro said.

To cut down on pollutants like mercury, particulate matter, and sulfur dioxide, the plant will spray the exhaust from its boilers with a lime powder. The  powder will turn the gases and tiny particles in the exhaust into bigger particles that will stick to 40,000 fabric bags the plant is installing.

The pollution essentially goes into the bags, and from there to a landfill, instead of out the plant’s smokestacks. The plant is on schedule to meet its final deadline of April.

The EPA plans to limit carbon dioxide emissions from coal plants, but that proposal hit an obstacle this week when the Supreme Court issued a stay on the EPA rule — until a lower court hears the case.  Still,  just in case, Homer City is applying for permission to use cleaner-burning natural gas.