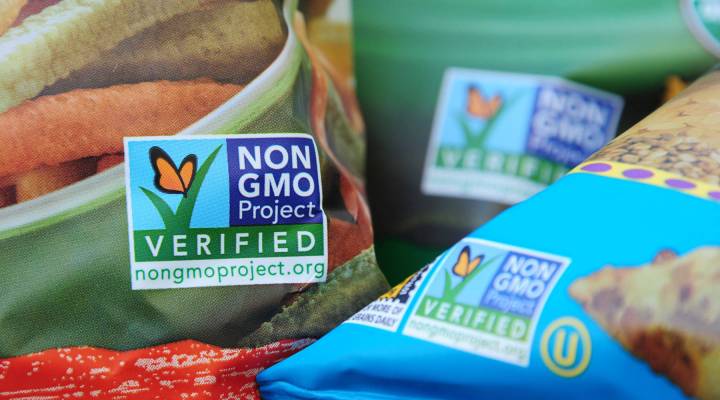 Don’t call it a GMO

This label can mean a lot of things. So how much does it really tell you? The FDA is trying to clear things up. ROBYN BECK/AFP/Getty Images

Don’t call it a GMO

This label can mean a lot of things. So how much does it really tell you? The FDA is trying to clear things up. ROBYN BECK/AFP/Getty Images

GMO food is kind of like hipsters. The label gets thrown around so much that it hardly means anything anymore. It’s so broad that people reflect their own meaning on it depending on their agenda.

The FDA is trying to clear things up with new guidance released this week around labeling genetically modified foods that ditches “GMO” altogether. So what’s what? Let’s dig into a (sort of) non-GMO meal.

You can find soybeans that haven’t been genetically engineered, but it’s not always easy; the FDA says 93 percent of soybeans grown in the U.S. have been bio-engineered. But “genetically modified” can also cover selective breeding, which is extremely common. So even if no one has gone in and messed with the DNA of a plant, figuring out if it’s been modified at all is tricky.

The FDA’s guidelines specifically mention berries growing in the wild as an example of a food that hasn’t been subject to any kind of selective breeding. Wild, naturally growing plants are a rare example of food that’s truly never been genetically modified. To reduce confusion around the broad definition of “modified,” the FDA recommends using phrases like “not genetically engineered.”

It follows that verifying a food product is completely free of genetic modification is extremely difficult, so the FDA recommends food makers avoid terms like “GMO-free,” and even “non-GMO,” instead getting more specific about ingredients that aren’t genetically engineered.

The Non-GMO project, a nonprofit that certifies food, acknowledges that even foods labeled “non-GMO” could still have up to 0.9 percent genetically modified ingredients.

The FDA says it won’t take action against “non-GMO” labels as long as the food doesn’t from a genetically engineered plant and the label isn’t misleading.

There’s lots of ways to make misleading food labels — you could make unsubstantiated health claims, or boast about how one ingredient is not genetically modified, while others are. You could also label “non-GMO” food that can’t be genetically engineered in the first place, like salt. That Mortons might be GMO-free, but only on a technicality.

Plenty of people take “non-GMO” to mean that their food isn’t derived from genetically engineered plants or animals. But that “O” stands for “organism,” and the FDA points out that very few foods actual contain an organism. That could make “non-GMO” labels confusing unless they’re on yogurt of kefir or other food with live cultures.