The tech sector in San Francisco may be booming, but the city’s homeless are still suffering.

With real estate prices skyrocketing, pressure on  San Francisco’s needy to find housing has intensified. Advocates say there is only one shelter bed for about every six homeless people, and the homeless and their neighbors are clamoring for solutions.

The city is now trying something a little different—a shelter with fewer rules and more open space.

Marco Simonetti sits on a bench, rolling back his sleeve to reveal thick, long, fresh scars running down his right arm. Simonetti says he was robbed and stabbed a couple of weeks ago.

Simonetti was living on the street. The attackers took all he had—a bike, wallet and $3.

“They just picked me at random I guess,” he says. He thinks his gray hair may have made him appear vulnerable.

Simonetti is safer now. He’s living at the Navigation Center.

The center is less institutional than most homeless shelters. There is a big courtyard and no curfew. Guests can come and go anytime.

“We’re trying to lower the barriers on the street to access shelter,” says Julie Leadbetter, the center’s director.

The biggest difference from most shelters, Leadbetter says, is that people can bring pets, partners and possessions. Usually, they have to leave all that behind.

“We don’t want to create a place that breaks down the very little supports that they have,” Leadbetter says. “It’s about starting with what they have and building up.”

Shelters are a Band-Aid, not a solution, Leadbetter says. They are often dorms crammed with beds. There’s no place to put your stuff, and they have a curfew for when you can come in and when you must leave during the day. Sexes are separated to protect women from rape. These conditions keep people out, she says.

Allen Naethe is an army vet who has been homeless 15 years. He says he has never gone to a shelter because he couldn’t abandon the love of his life. “I don’t go nowhere she won’t go,” Naethe says.

“She” is an English Staffordshire terrier named Benthe. She’s nine years old and pretty adorable. Naethe says he promised to get her a house, and that is what he’s trying to do now at the Navigation Center.

Allen Naethe with his dog, Benthe.

Once someone like Naethe comes in to the center, the goal is to get them on their feet and into housing in about two weeks. The center has government services on site to help with housing, benefits and jobs.

Bevan Dufty, San Francisco’s housing director, says the city is under pressure to innovate like this.

“The technology companies here want to see us do a better job responding to homeless,” Dufty says.

Dufty hopes the center will prove the city can be successful, and that tech companies will then start chipping in more, because the center isn’t cheap. It’s funded by a $2.4 million anonymous donation, and it accommodates only 75 people at a time.

For Simonetti though, the difference from other shelters is huge. “They treat you more like a regular person here,” he says. “They help more. They want to see you progress. They don’t want to see you stagnate.”

Simonetti hopes to organize himself and get back together with his old girlfriend, who is now living off the street. His big dream, though, is to buy a boat like the one he used to live in and head out through the Golden Gate bridge, turn left and keep on sailing. 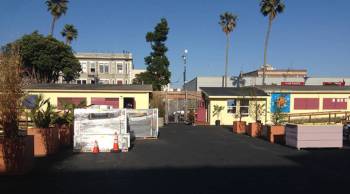