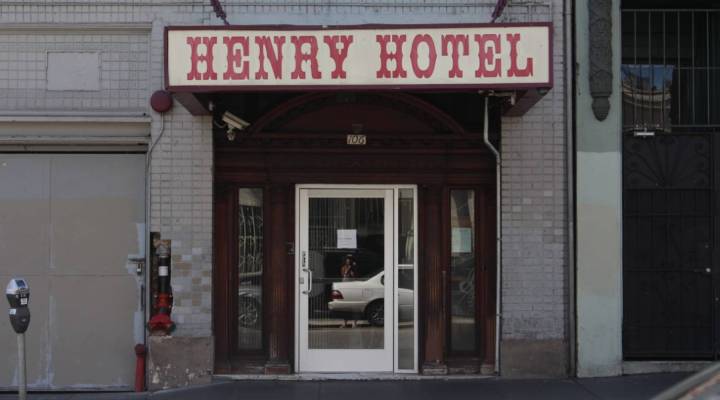 COPY
The old Henry Hotel in San Francisco has been converted into housing for the homeless.  Alyssa Schrag/ECS

The old Henry Hotel in San Francisco has been converted into housing for the homeless.  Alyssa Schrag/ECS
Listen Now

Renay Nonog does not have a bed. She decided to get a futon instead. Every morning she folds it into a couch so visitors have somewhere to sit. Nonog likes having guests, but she is not used to welcoming them into her home. This is the first one she has had in six years.

Nonog is living in a room at the Henry, an old hotel in a rough patch near downtown San Francisco. The city has partnered with Episcopal Community Services of San Francisco to lease the run-down single room occupancy and transform it into supportive housing for the homeless. Acquiring hotels like the Henry is part of the city’s new plan to help people living on the street.

San Francisco has been struggling with homelessness for decades. Today there are sprawling tent encampments and communities living underneath the freeways. It’s a mess. Many have vowed to fix the problem; none have succeeded.

The last six years have been hard for Nonog. For all that time she’s been homeless, she said, struggling just to survive. Near the end, a man she thought was her friend started abusing her. She had to get off the street.

“I was determined because I was tired,” she said. “This foot says I’m tired. This one says, ‘Me too.’” We are sitting together on Nonog’s futon, knee to knee. She is crying. “I’m sorry to get sentimental,” she said. “It’s just a blessing that I got this far.”

Nonog was able to move into the Henry because she went to the Navigation Center. It’s a new shelter where the homeless can stay for a few months and receive personalized attention. The Navigation Center serves as a centralized gateway to take people in, stabilize them and put them on a path to housing.

This, believe it or not, did not exist before, Sam Dodge said. He is in charge of managing the city’s initiative to end homelessness.

“We’re clearly struggling on the street with so much inflow, so many people becoming homeless,” Dodge said. He believes the the Navigation Center has been revolutionary. Other cities are now coming to San Francisco to see how it works.

“You go and you look at it, and it’s like there is nothing magic about this,” Dodge said. “It’s just a place. Many cities have other assets that they could repurpose for this. It’s the idea that’s important, not the building.”

San Francisco is doubling down on the idea, or rather tripling. It is planning two more Navigation Centers. But setting up shelter space is one thing. Finding permanent housing for the homeless is a whole other problem. This is where the hotels come in.

San Francisco is taking out multiyear leases on places like the Henry in order to house people coming out of the Navigation Center. Dodge says the city is committing $3 million a year to add 200 more rooms.

“This is a way to really tell the story about how we can use supportive housing to solve the homeless crisis,” Dodge said.

Although the hotel housing is a big step for those living on the street, Dodge said it is not a quick fix for homelessness. The city will have to continue assisting these new residents for years. But now, he said, the city can do a better job keeping track of people entering the system and make sure they receive all the benefits and assistance available to them.

There are many barriers to self-sufficiency for new residents at the Henry. Some come in with trauma and substance abuse problems. Many are not used to managing money, finding steady work or even just furnishing their new homes.

The Henry is operated by Episcopal Community Services of San Francisco, which provides onsite case managers to help out residents. Loretta Olivencia runs all the support services there. She said the transition is not easy. New tenants have lots of questions, some of them as simple as where to buy food and furniture. For many it has been years since they lived indoors.

To help new tenants like Renay Nonog get started in her new place, the Navigation Center sends them off with some practical items.

“They gave me like a whole, what do you call that, house-warming package,” Nonog said. There is a toaster oven and a soup pot, along with some other cooking and cleaning essentials. Nonog has everything arranged neatly on a little side table.

For the first time in six years, Nonog has a safe place for her stuff. She lost most of her possessions living on the street, but not her little sound system and CDs. She tells me she likes Beethoven and Al Green. She reaches for the stack of records to put one on. It’s amazing, Nonog said, in her new home she can just play an album whenever she wants.