When you think about the really big names in online retailing just a couple of companies probably come to mind: Amazon, eBay, maybe Apple. But there’s another name that can arguably be added to that list. Just 8 years after it started, Etsy does almost a billion dollars a year in annual transactions. Chad Dickerson is the guy who’s been running Etsy for the past five years, and we popped into the company’s corporate headquarters in Brooklyn to pay him a visit. Etsy’s business has doubled under Dickerson’s lead, and he says as Etsy grows, so goes its sellers.

“One of our sellers who was doing Etsy as an escape from nursing school, she started to achieve success and some exposure. Fast-forwarding she was noticed buy Nordstrom and did a deal with Nordstrom and now not only has she quit her job but her husband quit his finance job to help her. In this particular case this is literally a mom and pop. Etsy is really about making a life not just a living so we’re just giving them the ability to grow and really change their lives.”

Dickerson says the growth is just the start of the mark Etsy strives to make. He says the company hopes it won’t just give other online retailers a run for the money,  they’ll change the whole marketplace.

“What I see Etsy doing is changing the way things are made. I think the ethos of Etsy, this idea that buying and selling should be all about people will start extending into areas like manufacturing and distribution and all of these things. When I think about what Etsy can do over the next 10 or 20 years it’s really humanizing the whole supply chain.” 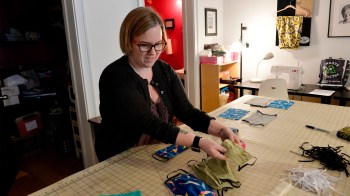