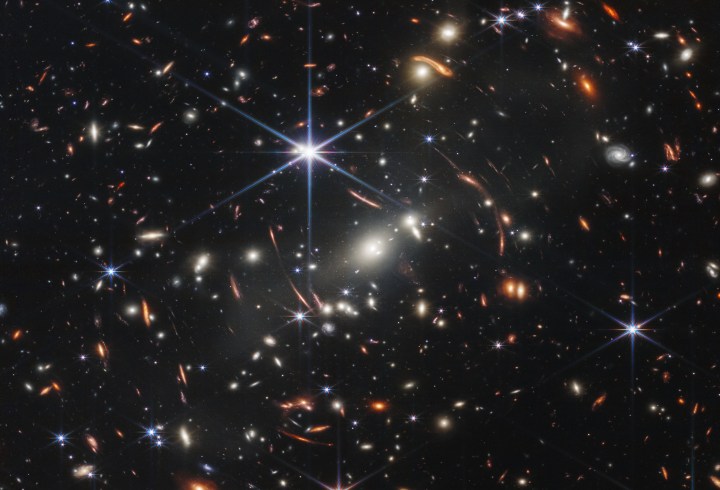 The world got a chance this week to peer 13 billion years into our past after the James Webb Space Telescope took the deepest infrared image of the universe.

“Webb’s image is approximately the size of a grain of sand held at arm’s length, a tiny sliver of the vast universe,” NASA said.

The JWST, considered a successor to the Hubble Space Telescope, captured the galaxies shown in Webb’s First Deep Field over the course of 12.5 hours.

In what seems like a similarly short timespan, images taken by the telescope have sprung up on light-up signs, sweatshirts, fanny packs and mugs. Other renowned space images, like the Pillars of Creation, have similarly become a fixture on products: jigsaw puzzles, pillow cases, jewelry and all sorts of other trinkets.

Retailers are free to use these images because they exist in the public domain. NASA images — along with videos, audio and other content — are typically not copyrighted, according to the agency’s website.

On-demand manufacturing, a production model, has enabled some online sellers to become more nimble than ever, creating listings within days. They don’t have to worry about how many items to pre-order or whether they’ll be able to sell all of their inventory.

Within 48 hours after Webb’s First Deep Field was unveiled, the online store StemCell Science Shop listed a fanny pack and sweatshirt featuring the image. It also announced that it would give away free Deep Field posters with every purchase this week.

Mudge opened up his store back in 2015, inspired by his love of science. Growing up, he recalls being captivated by a book filled with images from the Hubble Space Telescope.

A sweatshirt and fanny pack featuring the image of Webb’s First Deep Field. (Courtesy of the StemCell Science Shop)

The store uses a made-to-order manufacturer called Gooten, named after the inventor of the printing press, Johannes Gutenberg. Gooten is one in a series of companies that offer these services, including Printful, CustomCat and Prodigi.

Companies such as Gooten will print the fabric, cut it, assemble the product made-to-order, and then ship it directly to customers.

“This has been really great for businesses like mine that want to offer apparel and everything without it being our primary revenue. It’s just sort of something fun on the side for our customers,” Mudge said.

Gooten, he explained, allows him to do that without forcing his shop to pre-purchase large amounts of merchandise in advance. They don’t have to guess what sizes people will want and it creates less waste.

“Products ship as soon as they’re assembled, which usually only takes a couple of days,” Mudge said. “It’s all made in the U.S., and it prevents us from having stagnant inventory. It’s a win-win all around.”

This week on her shop, ProductiveSlacker, she’s put up listings for mugs, leggings, yoga mats and bluetooth speakers that showcase both First Deep Field and the Carina Nebula, which was also taken by the James Webb telescope. (The Hubble telescope has also taken images of the star-forming region, but the newly released images show it in greater detail.)

While some online sellers might use on-demand companies, others might have the capability to create products in-house. It’s now easier than ever to own a high-quality printer or other equipment needed to produce these products quickly, said Lorynn Divita, an associate professor in apparel design and merchandising at Baylor University.

“That is why so many small vendors are able to exist in this marketplace,” Divita said. “Now anybody can have a shop.”

How lucrative is this market?

While a method like on-demand manufacturing is convenient for sellers, it’s not necessarily profitable.

Mudge said the shop pretty much breaks even for Webb’s Deep Field products. Their team actually makes greater profits on items that aren’t made-to-order, like their subscription boxes, samples of elements from the periodic table, and fossils.

“But it’s always fun to have some extra trending things, like the Webb Deep Field, available,” he said.

D’Elia, who just launched her shop last year, said it hasn’t been that lucrative so far. The New Jersey-based resident works as a school counselor and runs her shop as a side hobby.

It’s not the most profitable venture, but those online sellers who use public domain images avoid the risks that come with improperly using copyrighted material.

“It definitely is a safe market,” Divita said. “If they’re found guilty of copyright infringement, they might have to pay damages as well as attorney fees and court costs. And for a small vendor like an Etsy vendor, that could bankrupt them.”

There will be plenty more images of space to come — this is only the start for the James Webb Space Telescope.

Astronomers, after seeing the telescope’s capabilities, will likely have “more challenging or impressive targets,” wrote Brett Tingley for Space.com.

“Perhaps the biggest immediate source of value will be to scientists and science in general — it is going to propel the careers of some scientists and universities and help us discover important new facts about the universe,” said Abhishek Nagaraj, an assistant professor in the management of organizations group at the University of California, Berkeley.

And that is priceless.