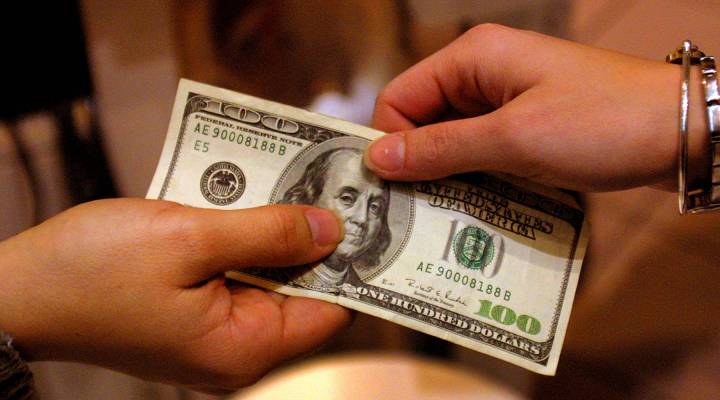 COPY
There are rules prop makers must follow in duplicating money. Joe Raedle/Newsmakers

Greg Bilson Jr. runs a company called Independent Studio Services or ISS. They make props for pretty much every movie and television show you’ve seen in the last 40 years, including 90210, CSI, and Indiana Jones.

One of ISS’s specialties? Prop money.

That made ISS the ideal company to work on Rush Hour 2. The premise of the movie is that two police offices, played by Jackie Chan and Chris Tucker, chase a counterfeiter known for producing high grade counterfeit money. To prepare for the climax of the film, ISS created a billion dollars of fake money.

Bilson says, “it was fourteen pallet loads of $100 bills, stacked four feet high, solid.” That’s a lot of money, all of which was to be blown up in a casino.

The scene went well but as thousands of these fake bills rained down, many extras grabbed a few of these bills and kept them as souvenirs. Some of those extras tried to spend the money.

The federal authorities weren’t too pleased about this. Secret service agents swarmed the set, shut down production, confiscated all the bills that were left, and then they paid Bilson a visit at ISS. He was essentially blamed for counterfeiting.

“Most people would look at this bill and kind of laugh” says Bilson. “It is a very bad picture of Ben Franklin, who we named ‘Franken,’ it says, ‘Motion picture use only’ on 15 different places, it [says], ‘In dog we trust.’ There are many many things that are different from the real bill, but it’s still not within the parameters of legal.”

Bilson has to operate under the counterfeit detection act of 1992. Essentially what this law says is that bills must be either 75% smaller than or 150% larger than the size of a real bill and one color, one side.

And that puts Greg Bilson and other prop builders in Hollywood in a tough spot. They have to skirt the line between these strict counterfeiting laws and producers’ demands for this incredibly realistic money. And sometimes, these prop builders have trouble finding that sweet spot in the middle.

“Movie producers and films and TV shows are kind of wanting us to break the law all the time. So we have to keep within those parameters, or do it in a manner that is legal.”

Like other prop masters, Bilson isn’t trying to dupe the public. He’s just doing his job.

Read the full story on Pricenomics.