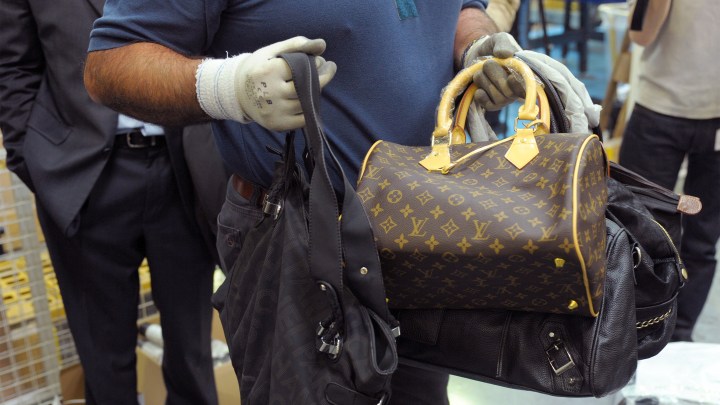 A French customs officer shows seized counterfeit handbags prior to their destruction at the postal sorting center of Chilly Mazarin, near Paris. Eric Piermont/AFP/GettyImages
The Season

A French customs officer shows seized counterfeit handbags prior to their destruction at the postal sorting center of Chilly Mazarin, near Paris. Eric Piermont/AFP/GettyImages

Last month, we reported that a retail and consumer brand trade group — the American Apparel and Footwear Association — asked the federal government to put Amazon on its list of “notorious markets” for counterfeit goods. As part of that story, we ordered several suspect items on the platform and took them to some experts for a lesson in how to spot a fake.

Ariele Elia, FIT: “It’s just kind of in this Mylar bag. If you were to buy it from a luxury brand, it would be in probably a beautiful box of some sort. So that’s kind of a dead giveaway just to begin with.”

Another sign it’s a fake? “Louis Vuitton typically sells their cell phone cases [for] anywhere from, if it’s a simple one with maybe just the monogram, it’s about $370.” (A fancier one, like this iPhone case made of “golden crocodile leather,” could cost you more than $5,000.)

Michael Londrigan, LIM College: “One of the other tells that I might look at is the ‘LV’ itself. There’s only one on the case. If you look at other Louis Vuitton products, [the LVs are] smaller in scope, they’re more together, and you can see more definition.”

“Even the gold lettering — this is very ostentatious for what Louis Vuitton really stands for. I would classify this one as a fake, for sure.”

“Look on the back, where you can put the little clip. The stitching is super crude. That’s kind of a telltale sign. Louis Vuitton goes through an extraordinary amount of quality controls to make sure that every single stitch is uniform. These are not uniform at all.”

“You’ll also notice too that they’ve kind of cut off the Louis Vuitton monogram. And that’s something that Louis Vuitton doesn’t do.”

Londrigan: “Just by the feel of this, this is a cheap piece of plastic — it’s probably polyvinyl chloride, PVC, and nothing that would ever say ‘Louis.’ They would never market a product like this.”

The clip, “actually feels a little like a coated metal, but still it is a cheap piece of … umm … equipment, shall we say, that, to me, really reeks of counterfeit.”

Elia: “This is definitely going to be a little bit more complicated to authenticate just because with Louis Vuitton products and luxury brands, they don’t sell as many and they don’t have as many variations. With Polo, over the years, there’s been so many different iterations of the Polo shirt. So it’s actually quite difficult.”

“If this was sold in the U.S., [the tags] wouldn’t necessarily be in Chinese or Japanese characters, it would definitely be in English.”

“It’s probably unlikely [Ralph Lauren would] have their Instagram handle on it. I don’t think I’ve ever seen that. It is possible, but it seems quite unlikely.”

I showed her the official logo from Ralph Lauren’s website.

“The official one has a lot more detail. They did get some of the level of detail on here, but not all of it.”

“You can see in the tail that they would have extra outline, in the knees of the horse, in the helmet of the polo player. It’s not as fine with the outline compared to what the actual trademark is.”

“And when thinking about it, if you were to be screen printing this, to get that level of detail of all the outlines of the horse, of the polo player, it would be quite difficult and more expensive because you’d have to cut out more on your stencil for your screen print. So that makes sense.”

Londrigan: “This one’s a little tougher. Some of the products that Polo Ralph Lauren markets and sells are what you would consider a commodity. A T-shirt, OK, it has a nice logo on the front. But aside from that, it is nothing more than a well-made T-shirt. Just even from the feel of it, I would say this would be 100% cotton. And the stitching is fairly well done.”

“You know, if you came to me and you showed me that there were no side seams, that would clearly mean that it was an underwear type T-shirt made in a single piece. And that would be more suspect in my mind because that would not be what the brand would stand for.”

“The jury would be out on this one.”

Ralph Lauren told us the company doesn’t authenticate products sold by third parties. The Amazon seller has not responded to our requests for comment.

We bought these products from third party sellers on Amazon. In 2018, almost 60% of Amazon’s merchandise sales came from third parties. That’s where the counterfeit problem is — counterfeit iPhone cases and sneakers and T-shirts and dietary supplements, and even bird feeders.

So far, courts have been reluctant to hold Amazon responsible for fake products sold by third parties on its site.

Amazon declined an interview, but it said in a statement that last year it blocked more than three billion suspected “bad listings” from its site.

Since our initial story, the sellers are still active. One of them is currently offering an earbud case with the Gucci logo for $13.99.