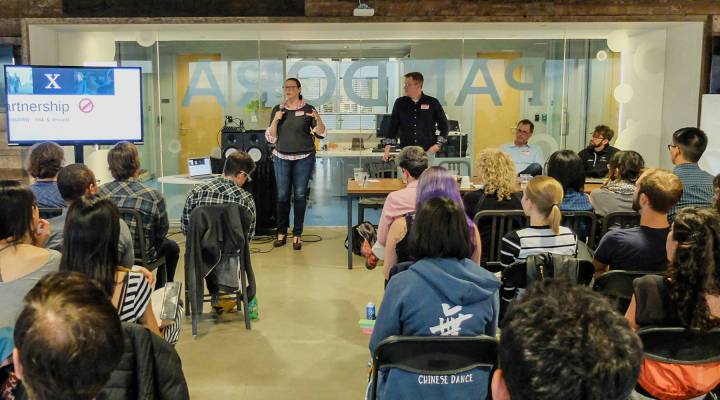 Pandora near parity on gender stats

COPY
An event hosted by the San Francisco chapter of the Interactive Design Association at Pandora headquarters. Pandora has noticeably higher representation of women than other tech companies.   (IxDASF/Flickr)

Pandora near parity on gender stats

An event hosted by the San Francisco chapter of the Interactive Design Association at Pandora headquarters. Pandora has noticeably higher representation of women than other tech companies.   (IxDASF/Flickr)
Listen Now

Pandora, the music streaming company, has entered the continuing debate over demographic diversity in the tech industry with a release of its own numbers. While the company has a similar racial profile to its tech peers, it has a remarkably high representation of women.

The statistics, just under 51% for men and 49% for women, are a marked departure from the breakdowns of other companies. Even so, the technical and leadership roles are still overwhelmingly male.

It is not clear what Pandora is doing differently — It, along with other companies, has been reluctant to talk in closer detail on the issue because diversity is considered such a sensitive subject.

Adrienne LaFrance, technology reporter at The Atlantic, adds that even if companies address issues with hiring, retention rates pose another major challenge; from support groups to the possibility of flexible working hours.