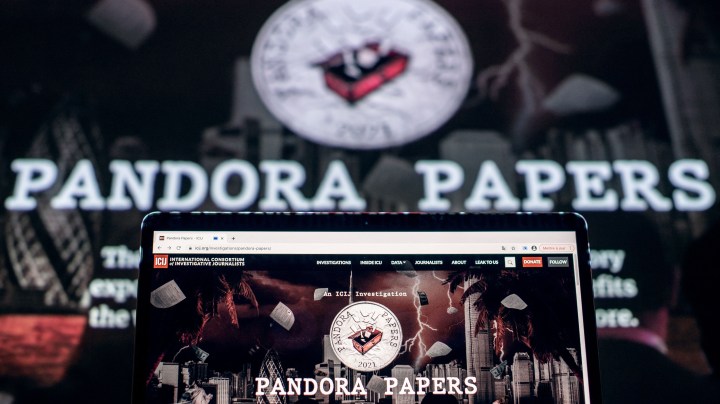 COPY
Among other things, the documents known as the Pandora Papers reveal the fast growth of special trusts in South Dakota, directly tied to the easing of restrictions, says the Guardian’s Dominic Rushe. Loic Venance/AFP via Getty Images

Among other things, the documents known as the Pandora Papers reveal the fast growth of special trusts in South Dakota, directly tied to the easing of restrictions, says the Guardian’s Dominic Rushe. Loic Venance/AFP via Getty Images
Listen Now

News from the International Consortium of Investigative Journalists broke Sunday about a trove of leaked financial documents called the Pandora Papers, which expose the financial secrets of political leaders, billionaires and other members of the global elite. The ICIJ shared the data with more than 600 journalists from 150 news outlets, who spent two years sifting through them.

“Marketplace” host Amy Scott spoke with Dominic Rushe, U.S. business editor at the Guardian, about what the documents reveal regarding U.S. involvement in offshore tax havens. The following is an edited transcript of their conversation.

Amy Scott: So, there’s obviously a lot in these documents, and I know we’ll continue to learn more in the coming days. But I wanted to focus with you on what we’ve learned about the U.S. financial system. Because usually when we think of offshore tax havens, you know, the U.S. doesn’t come to mind.

Dominic Rushe: Yeah, like you say, I mean, there’s an awful lot in here. And there’s going to be more in the days to come. But I think one of the early revelations is what a central part the U.S. is playing in what we’re going to call offshore, but seems a bit odd, as I’m talking to you from New York. One of the pieces we did today was about South Dakota, which has kind of emerged as the go-to place for the richest people in the world who are moving their cash there, because it has better protections than many of the other places we think of as being traditional havens for offshore money, like the Cayman Islands or even Switzerland.

Scott: Yeah, you talk about this whole trust industry that has emerged quite rapidly in South Dakota. How do these trusts work?

Rushe: Well, I mean, it’s amazing how much money they’ve got now. They’ve got about $367 billion in 2020 and had $75 billion in 2011. And you can directly tie that to the kind of easing of restrictions on these trusts. So one example is, you know, our partners at the Washington Post had a story today about a [divorced man] who was struggling to get money from his ex because the money she had in trust, he could no longer get access to. And there are all these kinds of rules [that] have been brought in that protect the money above the interests of people who might sue or, you know, creditors from other countries, etc. And they’ve just brought in more and more legislation that has kind of made these trusts ever more powerful.

Scott: Now, if this isn’t illegal, what’s the problem?

Rushe: Well, there’s real-world consequences here. I mean, you know, [Vice President] Kamala Harris, [in] her first foreign trip, she was in Latin America, where she was lecturing people, leaders there about corruption and about the need for transparency. Well, you know, at the same time, the U.S. has now become the haven for the global elite. This is money that could probably have been taxed in its origin countries in Colombia or the Dominican Republic, countries that certainly could do with boosting their tax revenues. You know, there are real-world consequences to people from the tax revenues, and then there are sort of geopolitical consequences from America establishing itself as this — strange to say, again — offshore tax haven.

Scott: The last time there was a massive leak of documents like this, known as the Panama Papers, some top government officials resigned, regulators were promising a lot of changes. Why do you think we’re here again?

Rushe: Well, in part it’s because we only ever seem to find these things out when there is an enormous data dump like this. I mean, this is a huge data dump, it’s 2.94 terabytes. So, that’s Netflix in HD for 24 hours, seven days a week, for 41 days. This is obviously a debate that I think people are having around the world, about how the global elite basically live by an entirely different set of rules. And we can kind of know that in theory, but these kinds of leaks show it in practice and show how much money is being kind of hidden away from taxmen across the world.