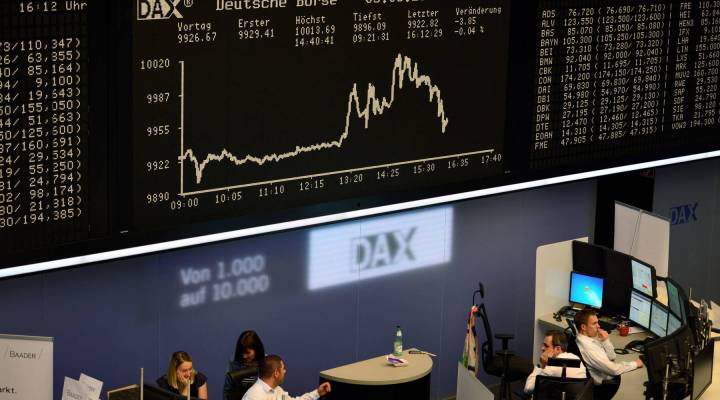 What negative interest rates mean for the Eurozone

COPY
Traders work under the index board that shows the DAX has broken the 10,000 mark for the first time ever at the Deutsche Boerse exchange on June 5, 2014 in Frankfurt, Germany. The rise comes after European Central Bank President Mario Draghi announced record low interest rates.  Thomas Lohnes/Getty Images

What negative interest rates mean for the Eurozone

Traders work under the index board that shows the DAX has broken the 10,000 mark for the first time ever at the Deutsche Boerse exchange on June 5, 2014 in Frankfurt, Germany. The rise comes after European Central Bank President Mario Draghi announced record low interest rates.  Thomas Lohnes/Getty Images
Listen Now

Remember when bottled water first came out? I remember thinking, “Who would actually ever pay for water?” I also remember balking at a 75 cents ATM fee years ago.

I imagine that’s exactly how European banks are feeling right about now. The European Central Bank’s new policy of negative interest rates is, essentially, charging banks for something that it used to pay banks for.

“Negative interest rates. What that means is that they are now charging commercial banks for leaving money at the central bank,” says Beth Ann Bovino, U.S. chief economist at Standard and Poor’s.

You know how banks usually pay you for storing your money with them? Now the ECB is actually charging European banks for the privilege.

So… how does this help the European economy?

“The ECB… is trying to create a hot seat,” says Paul Kedrosky, a partner at SK Ventures. “They just want to make it so darn uncomfortable to continue sitting there with your deposits, that you say, ‘Oh, screw it! I’ll lend it out.'”

Lending is exactly what European banks haven’t been doing. They’ve been playing it safe and stashing their money at the ECB. Businesses and individuals aren’t getting loans, so they aren’t hiring or buying and Europe’s economy is grinding to a halt.

“The Central Bank, their business is to get the real economy going,” says Bovino. To do that, The ECB is making it expensive for banks to save. “Hopefully that means more lending to households and businesses.”

So… will it work?

“Many banks in Europe are still fragile and recovering from the trauma of the world financial crisis,” says Matthew Slaughter, a professor at Dartmouth’s Tuck School of Business. “How much more likely they will be to make a lot more loans is an open question.”

Slaughter says banks might just put their money in another safe haven, like U.S. Treasury Bonds. That would be good for the U.S., but wouldn’t help Europe much.

The ECB can only make the seat hot, now it’s up to the banks to decide where to move their assets.