30 years ago, the Air Jordan brought celebrity to sneakers

30 years ago, the Air Jordan brought celebrity to sneakers

The fashion world has always been notoriously fickle. What’s hot this season may be considered passé in a few months. But one fashion accessory has had a spectacular run: the Nike Air Jordan. This is the 30th anniversary of the iconic sneaker, which has had a huge impact on the sneaker business. It spawned the era of the signature athletic shoe, and a whole generation of underground sneaker collectors known as sneakerheads, that today are not so underground.

In the early days, sneakerheads logged on to online message boards to buy and trade rare shoes. “Most of these people, they were located in the Midwest and down South and the West Coast,” says Brooklyn native Joe Guerrero. Everyone calls him Sneaker Joe. He was one of the first sneakerheads who figured out how to make money buying and selling rare shoes that weren’t available in big retail stores.

“I saw a demand,” says Sneaker Joe. He set out to meet that demand by “hitting up all these stores in downtown Brooklyn and the Bronx, Harlem, all these mom and pop shops that had urban accounts. I just started selling on eBay.”

Sneaker Joe’s business grew. Soon, he had international customers. He was cutting deals with stores and buying in bulk. He sold online until 5 p.m., took a break for a couple of hours, then started his second business, hand-delivering rare sneakers to celebrities like Jay-Z and LeBron James.

“That was up until 2007,” Joe says. “Then the market became oversaturated. It became harder to acquire shoes once all these blogs started reporting and hyping up stuff.”

By 2007, sneaker collecting had reached new heights. Camping outside a store for a new shoe release was common. “What changed the way sneakers are looked at is information, the internet,” says DJ Clark Kent. “If you didn’t know that a new Jordan was coming out, you wouldn’t be hyped up to get it.”

He was one of the people Sneaker Joe used to deliver to. Kent is a record producer and a sneaker aficionado who has designed several shoes for Nike, and hosts an online talk show about shoes. He says sneaker companies have mastered the art of hype. The limited edition special release is now a standard marketing strategy. “Everybody is hyped for what’s coming out on Saturday,” he says. “Saturday comes. Whoever gets it, gets it, and then next Saturday there’s something else, and then they are hyped all over again.”

For Sneaker Joe, camping out overnight for a shoe was never something he was willing to do. Today there are sneaker conferences and brick and mortar stores that have taken the place of entrepreneurs like him. So he has evolved with the times and altered his business model. He invented the Sneaker Pimp tournament, where sneakerheads compete for who has the coolest kicks. 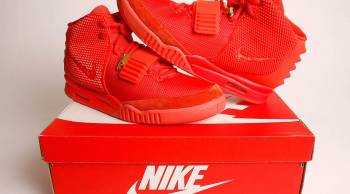 Looking for a new investment? Check your shoe closet