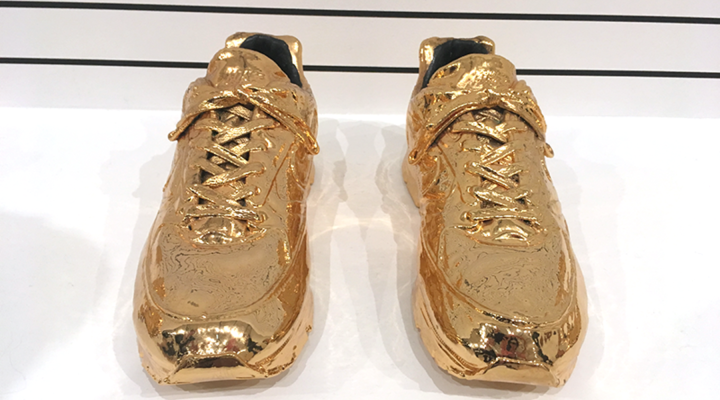 COPY
Limited edition sneakers are popular but they also have a troubled past. A close up of artist Gary Simmons's 1193 piece Lineup at the Whitney Museum of art where sneakers, dazzlingly presented in metallic gold, are placed against a police line up chart.    Sally Herships/Marketplace

Limited edition sneakers are popular but they also have a troubled past. A close up of artist Gary Simmons's 1193 piece Lineup at the Whitney Museum of art where sneakers, dazzlingly presented in metallic gold, are placed against a police line up chart.    Sally Herships/Marketplace
Listen Now

When twenty eight year old Robbie Williams of the Bronx talks about sneakers, his face gets a soft, besotted look, like he’s talking about a new girlfriend.

“It’s a love affair,” he says. “The way I lace them. The way they hit my foot. The way the light hits them.”

Williams even has a sneaker tattoo. In green ink, etched into his upper arm for all eternity, or until really good laser surgery, is a pair of Jordan Fives.

Robbie Williams has no more room left in his closet for anything else. He has 185 pairs of sneakers.

Some people collect stamps. Some people baseball cards. His dad, says Williams was into cars. But he is into sneakers.

“Growing up in the 90’s – you know, athletes were superhero. You idolized them. And the closest you could get, was that shoe. So each shoe holds a sentimental moment.”

But buying sentiment is expensive. Especially when it comes to the special limited editions that brands like Nike and Adidas put out in partnership with athletes and celebrities like Michael Jordan and Kayne West.

Sneakers are like wine. Before a new vintage comes out there’s buzz and prices go up. Then bottles flood the market and prices dip. But over time people drink their wine, or wear their sneakers, and as certain vintages and pairs, disappear from the market prices go up again.

The resale market for limited edition sneakers is now worth up to $1.3 billion dollars a year. And of course, there’s a booming resale market to support all this demand. Search for retro Nikes on eBay and you’ll find listings for pairs in the tens of thousands of dollars.  As apps and websites have infiltrated retail a whole new digital presence for the resale sneaker market has also sprung up.

“At the most basic level the brands produce less supply than there is demand,” said Josh Luber CEO of StockX.com, a site that sells sneakers as well as letting buyers track the value of their sneaker portfolios, almost like a bank.  “This is Econ 101.”

It used to be, to track down a pair of resale sneakers you had to know a guy or go from store to store. But now there are apps like Kixify, Slang and Goat, which bills itself as “the safest way to buy and sell sneakers through your mobile device.” Sites like Kicksworth.com and SHOEFAX.com let you check prices or get appraisals. Luber says just like with designer handbags, an entire industry of fake goods has sprung up around limited edition sneakers so his site authenticates every pair.

“The fakes are so good sometimes that a lot of people even bought a sneaker and maybe didn’t even know they have a fake,” Luber said.

When new sneakers come out it can be just like an iPhone release. Teenagers and grownups waiting in line — sometimes for days. Fights have broken out. So brands like Nike and Adidas are creating apps of their own. The idea is to let sneakerheads, the name for sneaker fans, reserve shoes online so they don’t have to wait in line. For special editions, buyers are limited to one pair each. But reaction has been divided.

“It’s really hard,” said Megan Ann Wilson, a sport stylist who dresses pro ball players and often finds herself sneaker shopping. “Like you have to get in line, online in an app to buy a shoe to have the right to buy the shoe in store.”

Megan Ann Wilson is wearing a pair of sneakers, the Night Maroon Jordan 11, based on the movie Space Jam and not yet out on the market.

Sneaker shopping has become so hard, Wilson says, even NBA players with sponsorship deals can’t always get the shoes they want. She says Nike has a special website where its athletes can shop. But some styles are only released in small numbers, and pro ballers have big feet.

“If you ever want to feel bad for a multi-million dollar 21-year-old,” she said, this is why. “Because his feet are too big or can’t wear the new Balenciaga or Jordans because they only went to [size] fifteen.”

But luckily for sneaker fans, pro athlete or regular guy, small independent buyers are finding a way around the sales limits imposed by brand’s apps.

“Bet your bottom dollar, the reseller is not worried about the app because he’s still getting his pair,” said Robbie Williams.

So how does a reseller manage to get 15 pairs of special limited edition shoes from a brand like Adidas or Nike that’s trying to limit sales to one per customer?

“The world may never know. It’s just one of those things,” said Williams.

Don’t ask questions, he says. Just tell the reseller what size you need. 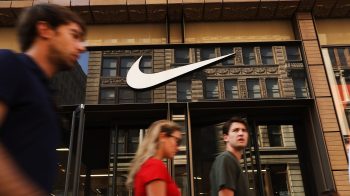