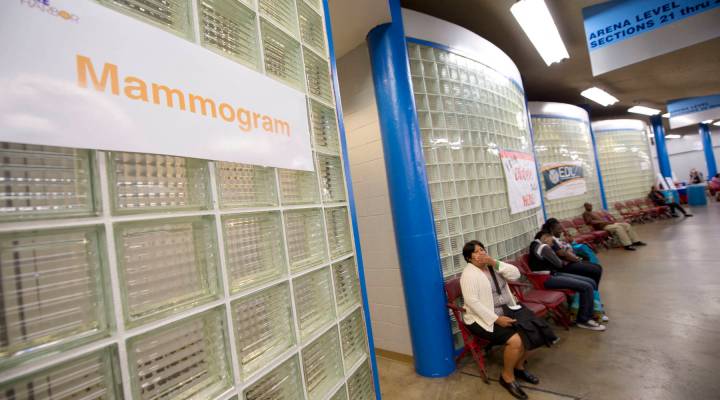 COPY
A woman waits outside the mammogram and women's health services area on the first day of the fourth annual free health clinic at the Los Angeles Sports Arena in downtown Los Angeles September 27, 2012.  Robyn Beck

When it comes to women’s health, routine mammograms are part of the gospel. But now, an in depth study in the British Medical Journal says the screening tests may not be that useful after all.

Researchers followed 90,000 women for 25 years, and determined that there was no difference in breast cancer deaths between women who got mammograms and those who did not.

Around 37 million mammograms are performed every year in the US, and they cost about $100 a piece. That’s not always money well spent, says Dr. Steven Narod, one of the study’ authors.

“Our conclusion is that if it worked, we would see it,” says Narod.

He adds this study is just the latest of many that have found mammograms to be ineffectual for most women. Still, mammograms remain one of the most widely used medical screenings. Nearly 75 percent of women over 40 have had one in the past year, and study findings have been widely disputed.

“The pushback comes from two sides: One is the radiologists, and secondly, the patients themselves,” says Narod.

J.B. Silvers is a professor of health care finance at Case Western Reserve University. He says years of awareness campaigns and marketing have patients demanding the tests, and a lot of doctors prescribing them.

“The whole idea of medicine is ‘do no harm’, it doesn’t say ‘do cost effective’. So, if it looks like something might be of value and might be able to help you out, there’s a big incentive to go ahead and do it.”

But there can be real harm in taking unneeded tests. “We end up with 1 screen-detected cancer in 3 being over-diagnosed, and that means that women got breast cancer therapy that they really didn’t need,” says epidemiologist Cornelia Baines, who co-authored the study.

In a statement, The American College of Radiology said mammograms have saved millions of lives, the study is deeply flawed, and didn’t include the most updated screening technology.