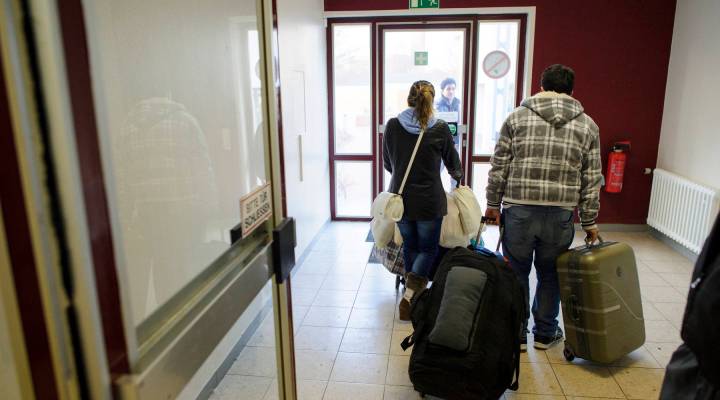 COPY
Unidentified Syrian refugees at the registration office of the refugee center on December 10, 2013 in Friedland, Germany. Hundreds of thousands of Syrians have fled Syria to neighboring countries as well as to Europe. Germany is accepting up to 5,000 Syrian refugees, though German church leaders recently called on their country to take at least 10,000. Jens Schlueter/Getty Images

Unidentified Syrian refugees at the registration office of the refugee center on December 10, 2013 in Friedland, Germany. Hundreds of thousands of Syrians have fled Syria to neighboring countries as well as to Europe. Germany is accepting up to 5,000 Syrian refugees, though German church leaders recently called on their country to take at least 10,000. Jens Schlueter/Getty Images
Listen Now

The Syrian Civil War has been going on for more than two years now. Most of the 2 million refugees cross the border into Lebanon, where they try to find space in cities and refugee camps that are already crowded.

Lebanon has asked the international community for help.

Germany says it’ll host 5,000 refugees for two years, but leaving a war zone to start a new life in one of Europe’s richest countries isn’t the easiest transition.

Friedland is a sprawling refugee complex in central German.  That’s where the Syrian refugees spend their first two weeks getting acclimated. There, they start with a crash course in all things German.

27 year old Hassan Othman is there with part of his nine-member family. The Othmans flew from Lebanon to Germany only a few days ago. “It is like a dream come true! We are in Germany, finally,” Othman says.

The Othmans’ road to Germany was a long one. They left Syria more than a year ago and moved to Beirut, Lebanon hoping to find work and quiet place to live, but that didn’t last long.

“After a few months we heard explosives and bombs and everything happened,” he says. “They said it’s going to happen [again] just like what happened in Syria.” They decided to try to move again, this time to Germany.

After a series of interviews with embassy and UN officials, their names were added to the list of the initial 5,000 Syrians taking part in a new program.

Heinrich Hoernschemeyer is head of the Friedland refugee center. He says the program serves those who meet special criteria. The refugees coming to Germany will mostly be made up of families, those who are ill or handicapped, and those with special skills or education to help rebuild Syria post-crisis, “So the group is very young. The number of children is very high, and we have relatively few single travelers,” Hoernschemeyer says.

At Friedland, German officials provide the Syrians with two-year work permits and register them for social services. Then after a few weeks, regional representatives pick up the refugees and drive them to their new homes scattered across Germany.

Hoernschemeyer says this is when the initial excitement fades, “When the reality of their situation hits them over weeks and months, then they become more cautious and the excitement of their first days slows down.”

Most refugees have no idea what to expect. Housing varies depending on the city, as does the attitude of their neighbors. Some Germans are supportive of the program and post signs welcoming the Syrians. While others have protested against the refugees, most recently in a working class neighborhood of Berlin.

Hassan’s mother Jamina is staying positive. She wants to enroll her two youngest children in school and create stability for her family. “It’s gonna be difficult from the beginning but step by step we will get used to it,” Jamina Othman says.

Hassan is already thinking about finding a job. He used to work at a big hotel but now dreams of life as an airport employee.

His one big concern is that all of his certificates and diplomas are back in Syria. “I came here with nothing and I only have the knowledge and I know what to work and what to do,” Hassan says.

And he hopes that will be enough to build a new life in Germany.