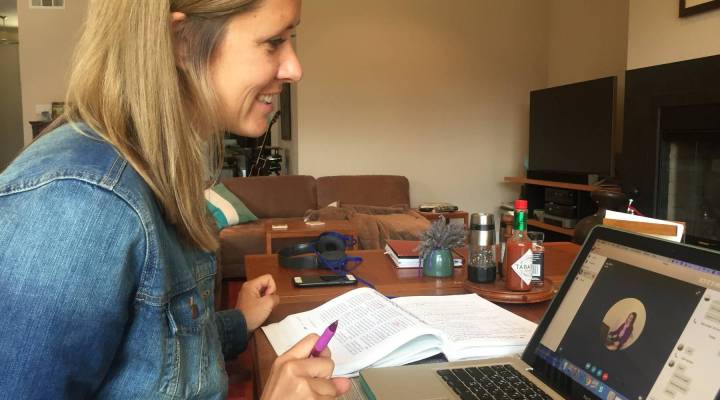 COPY
From her Los Angeles home, Kelsey Norman Skypes a Syrian refugee about once a week to chat in Arabic. Reema Khrais/Marketplace

From her Los Angeles home, Kelsey Norman Skypes a Syrian refugee about once a week to chat in Arabic. Reema Khrais/Marketplace
Listen Now

About once a week, Kelsey Norman plops into a chair at her kitchen table in Los Angeles, fires up Skype and dials Asalah Razzouk, a refugee living in the mountains of Lebanon.

A Syrian TV show echoes in the background as the two catch up. They chat about the weather, weekend plans and the trash piling up in Lebanon—all in Arabic. Razzouk listens carefully to Norman’s pronunciation and grammar, ready to give feedback.

The two have been meeting this way for months through a startup called NaTakallam, or “we speak” in Arabic. The online platform pairs Syrian refugees like Razzouk with people around the world who want to brush up on their Arabic.

“This is a way for me to continue speaking with someone,” said Norman, a PhD student studying migration and citizenship, who’s been learning Arabic for the last few years. “Also, I spent a lot of time in the past two years interviewing refugees and migrants, and I know how difficult it is to find work.”

Over the last few months, Norman has done more than 20 sessions with NaTakallam, at about $15 an hour.  Has her Arabic improved?

“I hope so,” she said with a laugh. “[Razzouk] would be a better judge of that than me.”

Razzouk, 32, fled Al-Salamiyah, Syria a couple years ago, leaving her family behind. She and her husband are among the more than 1 million Syrian refugees in Lebanon, where 70 percent live below the poverty line.

“Everything in Syria, I miss it,” she said.

Razzouk used to teach middle school. She also has a degree in economics and had planned to continue her education before the war broke out. Her resume, however, doesn’t amount to much in Lebanon, where locking down a job as a refugee can be difficult.

“I look for a job and I talk with many friends, but I cannot [find one],” she said.

Before her new gig, she kept busy reading books at the library and watching American TV shows while her husband, a journalist, was at work. Today, she chats with several students around the world– Switzerland, Australia, U.S. – making roughly $400 a month.

“We clearly know that there’s an impact,” said Aline Sara, who co-founded NaTakallam. “We have Syrians who are making a full-time salary, or two or three times the minimum wage in places like Lebanon and Egypt.”

Syrian tutors receive $10 an hour; the rest of the money goes toward operating costs, like maintaining the website and travel. To help recruit teachers, the startup has been working with the Beirut-based nonprofit organization Sawa for Development and Aid.

Sara said she came up with the idea for NaTakallam last year after finishing graduate school at Columbia University. As a Lebanese-American, she wanted to sharpen her own Arabic.

“My grandma would tease me and say, ‘You’ve been studying Arabic for so many years and you still speak with a broken accent!’” she said with a laugh.

But perfecting her accent is nothing compared to launching a business. She’s had to battle stereotypes about Syrian refugees, deal with unpredictable internet and electricity in foreign countries and, of course, raise money.

So far, NaTakallam has signed up roughly 30 Syrians around the world – from Brazil to Egypt – to work with more than 150 students at a given time.

“It’s not us helping them because they’re desperate refugees. It’s us leveraging everything they have to offer,” said Sara, adding that many of the refugees are architects, lawyers and former students.

For language learners, it’s an opportunity to practice conversational Arabic, which is often left out in U.S. classes. Most language courses focus on classical Arabic.

In fact, some universities have decided to team up with NaTakallam to give their students a chance to complement their traditional classes with Skype conversations. Swarthmore College and George Washington University, for example, are setting aside small funds to help cover costs.

“It’s a nice way to be in your bedroom in Brooklyn and talk to someone who’s in the mountains in Lebanon who can share your story, but also help you practice your Arabic,” Sara said.